The 1792 Unzen earthquake and tsunami resulted from the volcanic activities of Mount Unzen (in the Shimabara Peninsula of Nagasaki Prefecture, Japan) on 21 May. This caused the collapse of the southern flank of the Mayuyama dome in front of Mount Unzen, resulting in a tremendous megatsunami, killing 15,000 people altogether.[2] It was also called Shimabara erupted, Higo affected (島原大変肥後迷惑), (Shimabara means the central mountain of the Shimabara Peninsula) since many people were killed by this tsunami in Higo (Kumamoto Prefecture, situated 20 km (12.4 mi) away across the Ariake Sea). 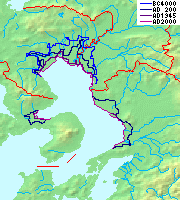 Change of coastline of Ariake Sea, Mount Unzen in the center, Kumamoto Prefecture (right) and Amakusa islands (down) were affected by tsunami

Towards the end of 1791, a series of earthquakes occurred on the western flank of Mount Unzen which gradually moved towards Fugen-dake (one of Mount Unzen's peaks). In February 1792, Fugen-dake started to erupt, triggering a lava flow which continued for two months. Meanwhile, the earthquakes continued, shifting nearer to the city of Shimabara. On the night of 21 May, two large earthquakes were followed by a collapse of the eastern flank of Mount Unzen's Mayuyama dome, causing a landslide which swept through the city of Shimabara and into Ariake Bay, triggering a great tsunami.

It is not known to this day whether the collapse occurred as a result of an eruption of the dome or as a result of the earthquakes. The tsunami struck Higo Province on the other side of Ariake Bay before bouncing back and hitting Shimabara again. Out of an estimated total of 15,000 fatalities, around 5,000 are thought to have been killed by the landslide, around 5,000 by the tsunami across the bay in Higo Province, and a further 5,000 by the tsunami returning to strike Shimabara. The waves reached a height of 330 feet, classing this tsunami as a small megatsunami. At the Osaki-bana point Futsu town, the waves locally grew to a height of 187 ft (57 m) due to the effect of sea bottom topography.

Lake Shirachi is a pond in Shimabara city, Nagasaki Prefecture which was created after the landslide at Mayuyama created by the inpouring of underground water. Its size was first 1 km (south-north) and 300m 400m (east to west), but the production of a water exit river made it smaller and it is now 200 m by 70 m.

As a result of the destruction, Tsukumojima or 99 islets or rocks were distributed near Shimabara city. In the same Nagasaki Prefecture, there are 99 islands or Kujūkushima distributed from Sasebo city to Hirado city. These islands are different from Tsukumojima.