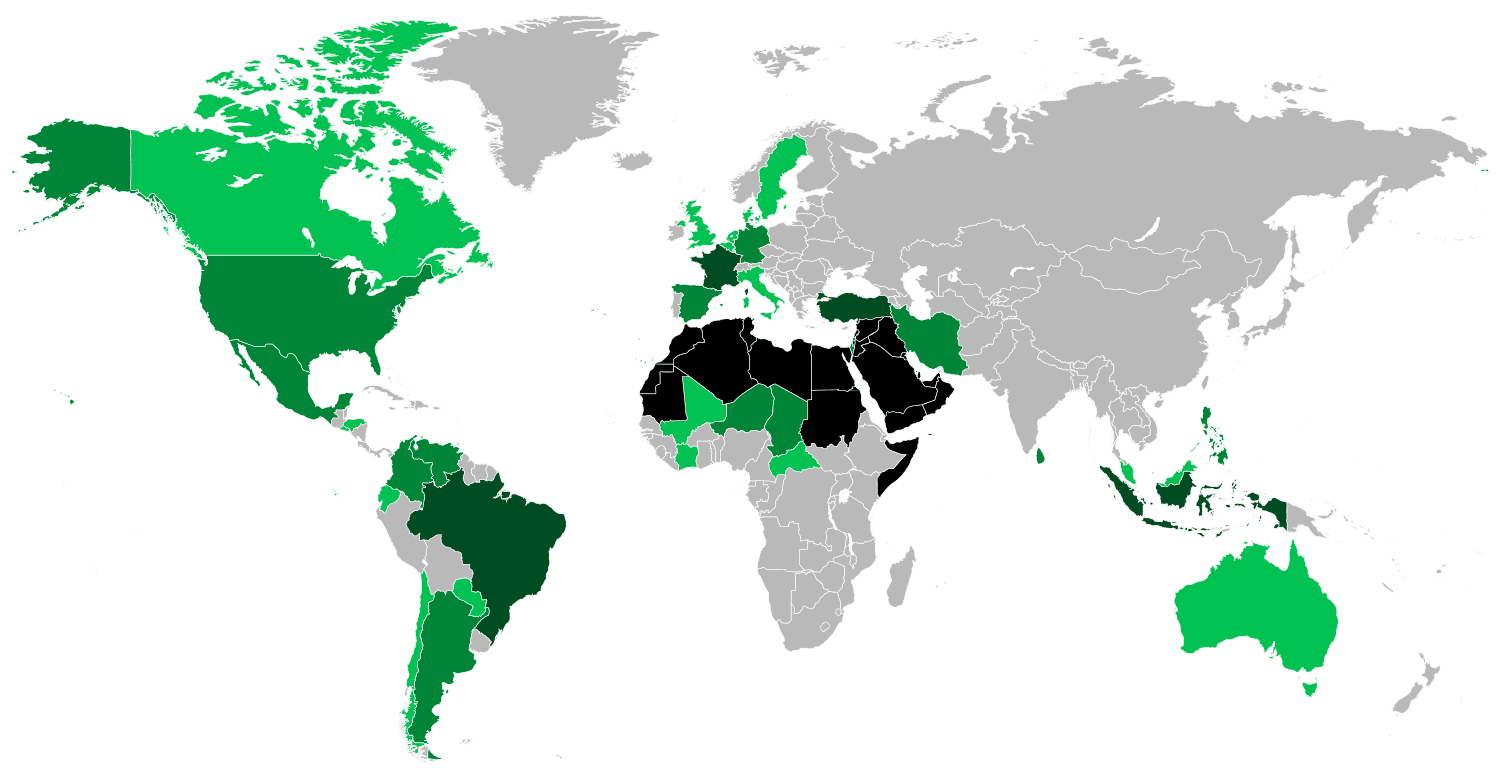 listen)), also known as the Arab people, are an ethnic group[lower-alpha 1] mainly inhabiting the Arab world in Western Asia and North Africa, and to a lesser extent the Horn of Africa, and the western Indian Ocean islands (including the Comoros).[68] An Arab diaspora is also present around the world in significant numbers, most notably in the Americas, Western Europe, Turkey, Indonesia, and Iran.[69][70][71][72][73] In modern usage, the term "Arab" tends to refer to those who both carry that ethnic identity and speak Arabic as their native language. This contrasts with the narrower traditional definition, which refers to the descendants of the tribes of Arabia.[74] The religion of Islam was developed in Arabia, and Classical Arabic serves as the language of Islamic and Arabic literature. 93 percent of Arabs are Muslims[75] (the remainder consisted mostly of Arab Christians[76]), while Arab Muslims are only 20 percent of the global Muslim population.[77]

The first mention of Arabs appeared in the mid-9th century BCE, as a tribal people in eastern and southern Syria and the northern Arabian Peninsula.[78] The Arabs appear to have been under the vassalage of the Neo-Assyrian Empire, as well as the succeeding Neo-Babylonian, Achaemenid, Seleucid, and Parthian empires.[79] The Nabataeans, an Arab people, established a kingdom centered in Petra (modern-day Jordan) in the 3rd century BCE. Arab tribes, most notably the Ghassanids and the Lakhmids, began to appear in the southern Syrian Desert from the mid-3rd century CE onward, during the middle to later stages of the Roman and Sassanid empires.[80] Before the expansion of the Rashidun Caliphate, the term "Arab" referred to any of the both largely nomadic and settled Arabic-speaking people from the Arabian Peninsula, the Syrian Desert, and Lower Mesopotamia, with some even reaching what is now northern Iraq.[81] Since the height of pan-Arabism in the 1950s and 1960s, "Arabs" has been taken to refer to a large number of people whose native regions became part of the Arab world due to the spread of Islam, which saw the expansion of Arab tribes and the Arabic language throughout during the early Muslim conquests of the 7th and 8th centuries. These cultural and demographic influences resulted in the subsequent Arabization of the indigenous populations.[82][83]

The Arabs forged the Rashidun, Umayyad, Abbasid, and Fatimid caliphates, whose borders at their zenith reached southern France in the west, China in the east, Anatolia in the north, and Sudan in the south, forming one of the largest land empires in history.[84] In the early 20th century, World War I signalled the beginning of the end of the Ottoman Empire, a Turkish polity that had ruled much of the Arab world since its conquest of the Mamluk Sultanate in 1517.[85] The Ottoman defeat in World War I culminated in the 1922 dissolution of the empire and the subsequent partitioning of Ottoman territories, which formed some of the modern Arab states in the Mashriq.[86] Following the adoption of the Alexandria Protocol in 1944, the Arab League was founded on 22 March 1945.[87] The Charter of the Arab League endorsed the principle of a unified Arab homeland whilst respecting the individual sovereignty of its member states.[88]

Today, Arabs primarily inhabit the 22 member states of the Arab League. The Arab world stretches around 13,000,000 square kilometres (5,000,000 sq mi), from the Atlantic Ocean in the west to the Arabian Sea in the east and from the Mediterranean Sea in the north to the Horn of Africa and the Indian Ocean in the southeast. People of non-Arab ethnicities associated with non-Arabic languages also live in these countries, sometimes as a majority; these include Somalis, Kurds, Berbers, the Afar people, Nubians, and various others. The ties that bind Arabs together are ethnic, linguistic, cultural, historical, identical, nationalist, geographical, and political.[89] The Arabs have their own customs, language, literature, music, dance, media, cuisine, dress, society, sports, and mythology, as well as significant influence on Islamic architecture and Islamic art.[90] Arabs have greatly influenced and contributed to diverse fields, notably architecture and the arts, language, Islamic philosophy, mythology, ethics, literature, politics, business, music, dance, cinema, medicine, science, and technology in ancient and modern history.[91]

Arabs are a diverse group in terms of religious affiliations and practices. In the pre-Islamic era, most Arabs followed polytheistic religions. However, some tribes had adopted Christianity or Judaism and a few individuals, known as the hanifs, apparently observed another form of monotheism.[92] Presently, there is a sizable Christian minority in the Arab world.[93] Arab Muslims primarily belong to the Sunni, Shia, Ibadi, and Alawite denominations. Arab Christians generally follow Eastern Christianity, such as those within the Oriental Orthodox Churches, the Eastern Catholic Churches, or the Eastern Protestant Churches.[94] There also exists a small numbers of Arab Jews still living in Arab countries, and a much larger population of Jews descended from Arab Jewish communities living in Israel and various Western countries, who may or may not consider themselves Arab today.[citation needed] Arabic-speaking Christian minorities in Arab-majority states may also not ethnically identify as Arabs, such as Copts and Assyrians. Other smaller minority religions also exist, such as the Druze[95] and the Baháʼí Faith.