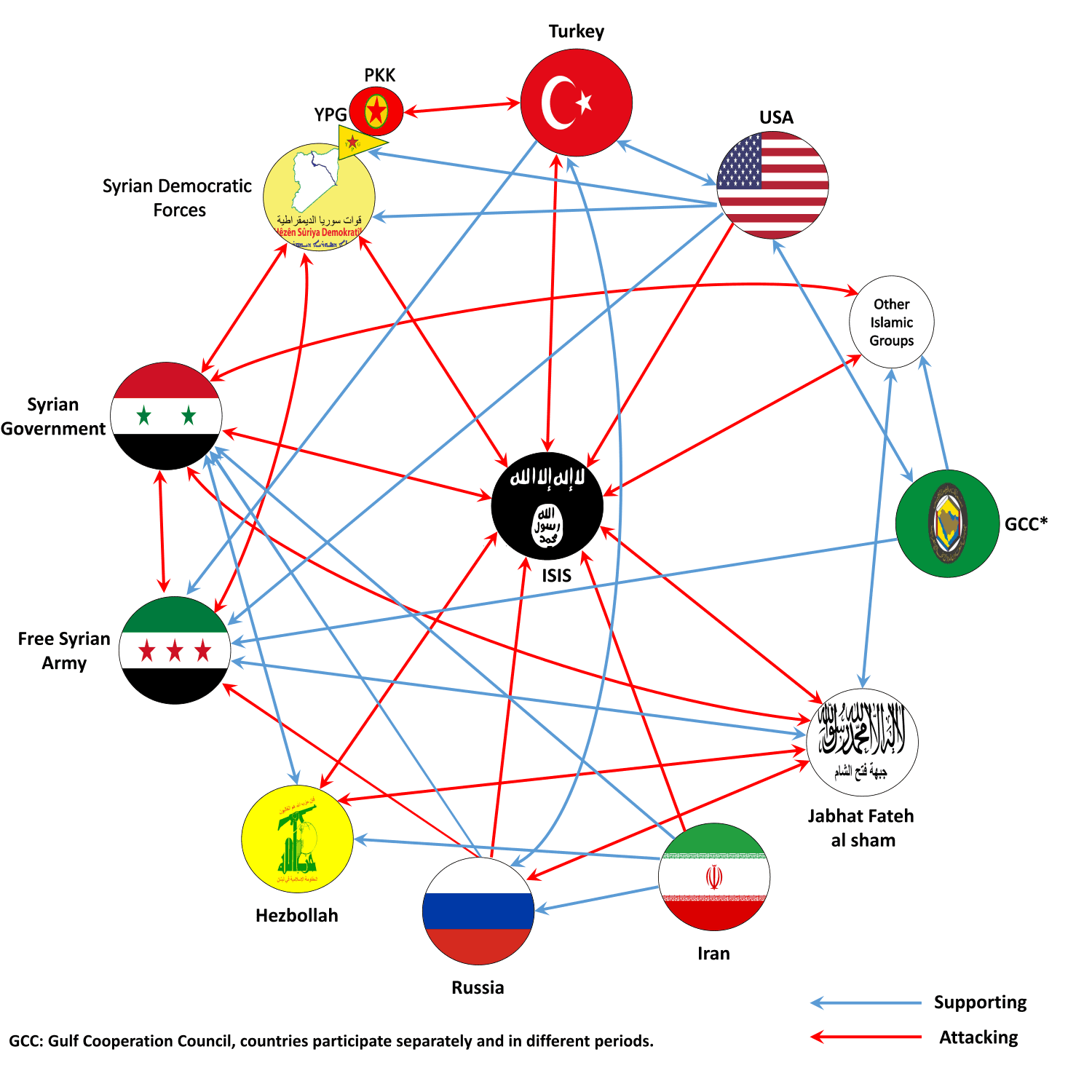 Foreign involvement in the Syrian Civil War refers to political, military and operational support to parties involved in the ongoing conflict in Syria that began in March 2011, as well as active foreign involvement. Most parties involved in the war in Syria receive various types of support from foreign countries and entities based outside Syria. The ongoing conflict in Syria is widely described as a series of overlapping proxy wars between the regional and world powers, primarily between the US and Russia[1][2][3][4][5][6] as well as between Iran and Saudi Arabia.[7]

Political, military and operational support to parties involved in the ongoing conflict in Syria

The Syrian government is politically and militarily supported by Iran and Russia, and actively supported by the Lebanese Hezbollah group, the Syrian-based Palestinian group PFLP-GC, and others. Since 30 September 2015, Russia, the only foreign power that has its military assets openly and legally stationed in Syria, has waged an intensive air campaign against anti-government forces in Syria, on the side of and at the request of the Syrian government. The military activity of Russia in Syria has been criticized by the US and its regional allies; Turkey overtly clashed with the Russian military in November 2015 over the alleged violation of its airspace by a Russian plane, as well as over Russia′s bombardment of the areas held by anti-government forces supported by Turkey.[8]

The Syrian opposition, politically represented by the Syrian National Coalition, receives financial, logistical, political and in some cases military support from major Sunni states in the Middle East allied with the U.S., most notably Saudi Arabia, Qatar, and Turkey. From the early stages of the conflict in Syria, major Western countries such as the U.S, France, and the UK have provided political, military and logistic support to the opposition and its associated rebel groups in Syria.

The Syrian Democratic Forces of the Executive Council (Rojava), the government of Rojava, have received military and logistic support from some NATO countries, the US in particular. Since July 2015, it has been attacked by the Turkish military and the Turkish-backed Free Syrian Army, leading to the Turkish occupation of northern Syria.

From 2014 until October 2017, a significant part of Syria's territory was controlled by the Islamic State of Iraq and the Levant (ISIL), an entity internationally recognised as terrorist, a number of Western and other countries, most notably the U.S., Russia, Britain, and France, have participated in direct military action against ISIL in both Syria and Iraq.