For faster navigation, this Iframe is preloading the Wikiwand page for Mexican Spitfire (film series). 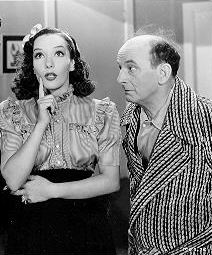 Mexican Spitfire refers to a series of eight comedy films released by RKO Pictures between 1940 and 1943 starring Lupe Vélez and Leon Errol. The movies featured the character of Carmelita Lindsay (Lupe Vélez), a sympathetic and temperamental Mexican singer who leaves her career and native country to meet Dennis Lindsay (Donald Woods in the first three, Charles "Buddy" Rogers in the next three, and Walter Reed in the final two), an elegant and handsome American businessman. The series began with the 1939 film The Girl from Mexico, which first introduced Carmelita and the other characters of the series. The premise is based mainly on the culture shock facing Carmelita in her new married life, especially when she gets to know the family and friends of her husband, including his stuffy Aunt Della (Elizabeth Risdon). She finds in her husband's uncle, Matthew 'Matt' Lindsay (Leon Errol), a friend and adventurous accomplice, as they both get into trouble from situations usually caused by their scheming and by the volatile temperament of Carmelita, as well as Matt being forced at some point to impersonate the eccentric Lord Epping (also Errol), almost always when he's elsewhere on the premises. The plot often took a back seat to gags, many of them supposedly ad-libbed by Vélez and Errol during filming.

Films in the series

Each film is not simply a comedic film, but a satire of the cultural shock and stereotypes of the Mexican people (and Latin American people in general) in the American society at the time.

Mexican Spitfire has been compared and contrasted to I Love Lucy. Both feature Latino-Anglo couples, with a sweet troublemaker wife. Lucy reverses the racial makeup, but outbursts of frustrated Spanish from the Latino partner remain a theme.[1]