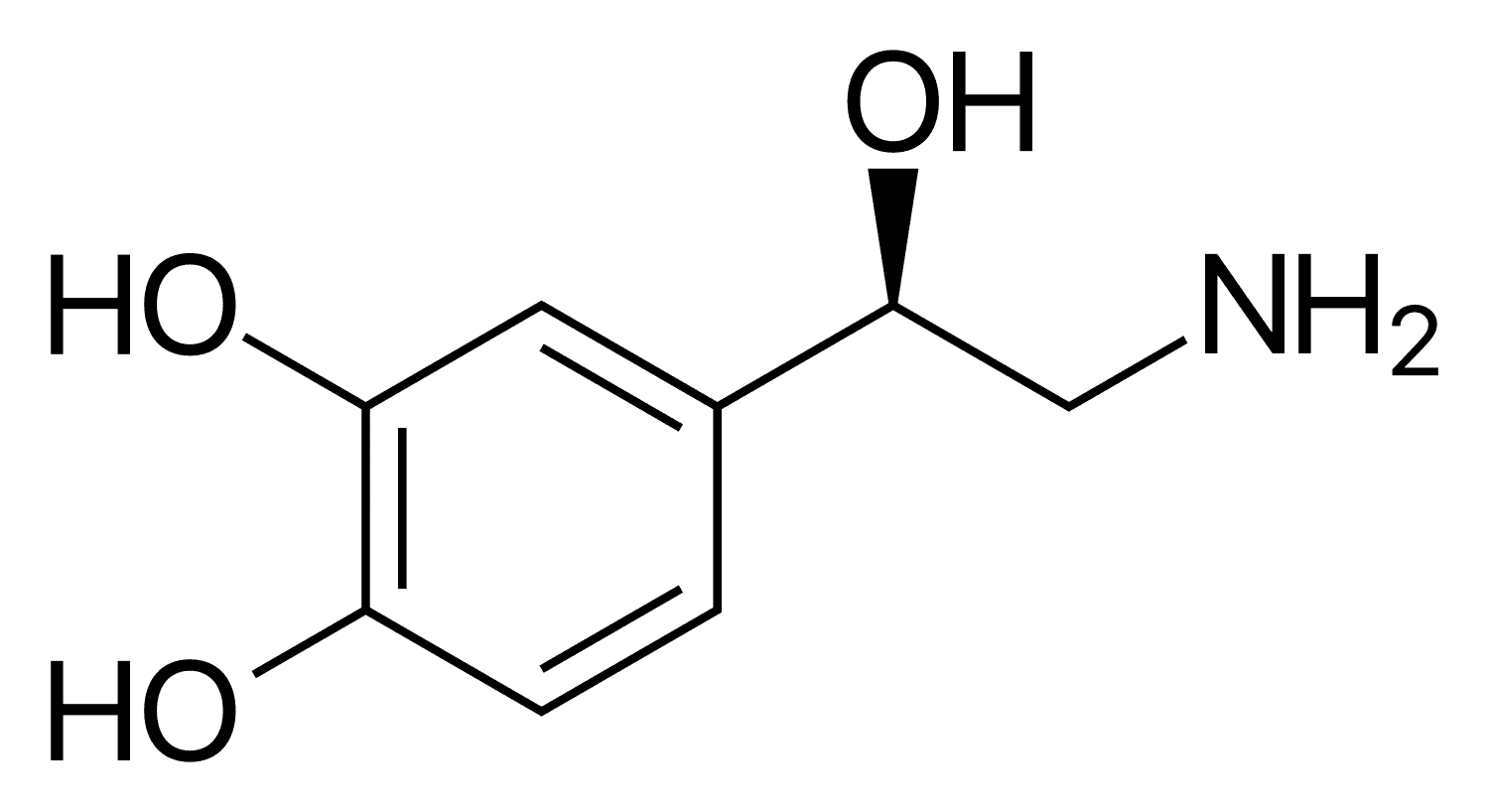 Norepinephrine (NE), also called noradrenaline (NA) or noradrenalin, is an organic chemical in the catecholamine family that functions in the brain and body as both a hormone and neurotransmitter. The name "noradrenaline" (from Latin ad, "near", and ren, "kidney") is more commonly used in the United Kingdom, whereas "norepinephrine" (from Ancient Greek ἐπῐ́ (epí), "upon", and νεφρός (nephrós), "kidney") is usually preferred in the United States.[2] "Norepinephrine" is also the international nonproprietary name given to the drug.[3] Regardless of which name is used for the substance itself, parts of the body that produce or are affected by it are referred to as noradrenergic.

The general function of norepinephrine is to mobilize the brain and body for action. Norepinephrine release is lowest during sleep, rises during wakefulness, and reaches much higher levels during situations of stress or danger, in the so-called fight-or-flight response. In the brain, norepinephrine increases arousal and alertness, promotes vigilance, enhances formation and retrieval of memory, and focuses attention; it also increases restlessness and anxiety. In the rest of the body, norepinephrine increases heart rate and blood pressure, triggers the release of glucose from energy stores, increases blood flow to skeletal muscle, reduces blood flow to the gastrointestinal system, and inhibits voiding of the bladder and gastrointestinal motility.

In the brain, noradrenaline is produced in nuclei that are small yet exert powerful effects on other brain areas. The most important of these nuclei is the locus coeruleus, located in the pons. Outside the brain, norepinephrine is used as a neurotransmitter by sympathetic ganglia located near the spinal cord or in the abdomen, as well as Merkel cells located in the skin. It is also released directly into the bloodstream by the adrenal glands. Regardless of how and where it is released, norepinephrine acts on target cells by binding to and activating adrenergic receptors located on the cell surface.

A variety of medically important drugs work by altering the actions of noradrenaline systems. Noradrenaline itself is widely used as an injectable drug for the treatment of critically low blood pressure. Beta blockers, which counter some of the effects of noradrenaline by blocking their receptors, are frequently used to treat glaucoma, migraine, and a range of cardiovascular problems. Alpha blockers, which counter a different set of noradrenaline effects, are used to treat several cardiovascular and psychiatric conditions. Alpha-2 agonists often have a sedating effect and are commonly used as anesthesia enhancers in surgery, as well as in treatment of drug or alcohol dependence. Many important psychiatric drugs exert strong effects on noradrenaline systems in the brain, resulting in side-effects that may be helpful or harmful.