Szydłów - Wikiwand
For faster navigation, this Iframe is preloading the Wikiwand page for Szydłów.

Szydłów[2][3][4] [ˈʂɨdwuf] is a fortified town in Staszów County, Świętokrzyskie Voivodeship, in southeastern Poland. It is the seat of the gmina (administrative district) called Gmina Szydłów. It lies approximately 13 kilometres (8 mi) west of Staszów and 43 km (27 mi) south-east of the regional capital Kielce.[5] The village has a population of 1,093.

Szydłów's history dates to the 12th century. It gained its city rights in 1329 and lost them in 1869. The village several tourist attractions, including the 16th-century Szydłów Synagogue, several buildings and churches dating to the 14th century and the ruins of a castle from the same period. The first official inventory of important buildings in Poland, A General View of the Nature of Ancient Monuments in the Kingdom of Poland, led by Kazimierz Stronczyński from 1844–55, describes the Szydłów Synagogue as one of Poland's architecturally notable buildings.[6]

Szydłów is located in Lesser Polish Upland, between the Świętokrzyskie Mountains and the Połaniec Plain. The village lies within borders of Chmielnik–Szydłów Protected Landscape Area. The distance to Kielce is 40 kilometers, to Staszów 12 kilometers. Due to numerous plum orchards, the village is called Plum Capital of Poland. Every year, the Plum Festival takes place here. The village is crossed by two regional roads—765th and 756th; furthermore, Szydłów is a stop along Lesser Polish Way.

First mention of Szydłów comes from the year 1191, in documents of Sandomierz Collegiate church. At that time, the village was owned by Polish Kings, located along the Vistula merchant road, which was of major importance in the late Middle Ages. On July 1, 1329, Szydłów was incorporated as a town on Środa Śląska town law (see also: Magdeburg rights).

In the mid-14th century, King Casimir III the Great founded here a fortified castle and the Church of Saint Ladislaus. The town was surrounded by a defensive wall, with three gates—Kraków Gate, Opatów Gate, and Water Gate. Soon afterwards, Szydłów became the seat of a starosta, and first artisans came here, as well as Jewish settlers. The town was located in Lesser Poland's Sandomierz Voivodeship, and its location helped wine, cattle and hops merchants, who would go with their goods to Sandomierz. In the 16th century, Szydłów emerged as a center of cloth-making. Also, tailors, bakers, shoemakers, iron smiths, saddle makers, sword makers and pot makers worked here, there also was a brewery. In 1528, waterworks and bath houses were opened, and in 1564, the town had 180 houses, of which 49 were located on the market square, but next year, large parts of Szydłów burned in a fire. At that time, a number Jews settled in the town, who in 1534–1564 built first synagogue.

Good times came to an end in the first half of the 17th century. In 1630 Szydłów was burned by rebellious soldiers of fortune, who were not paid their salaries. Unable to enter the fortified town, the mercenaries set the suburbs on fire, and the blaze reached Szydłów. Swedish invasion of Poland (1655–1660), and the invasion of troops of George II Rakoczi (see Treaty of Radnot) brought almost complete destruction, after which town's population shrank from 1,300 to 350, and the number of houses was reduced to 54 (as for 1663). After these conflicts, Szydłów never recovered to its previous prosperity. In 1789, Szydłów had a stone town hall, 5 mills on the Ciekąca river and 196 houses, many of them abandoned. The castle was ruined, and by 1827, the number of houses grew to 202, and the population reached 1,550.

After the third partition of Poland (1795), Szydłów was annexed by the Austrian Empire, but in 1809 it became the seat of a county in the Duchy of Warsaw. In 1815 it became part of Congress Poland, and in 1850, Russian authorities liquidated Szydłów County, merging it with Stopnica County. In 1869, as a punishment for participation of residents in the January Uprising, Szydłów was reduced to the status of a village.

In 1929 Szydłów, already part of Kielce Voivodeship, had 2,246 inhabitants, of which 30% were Jews. During World War II, part of the town, and almost all of its Jewish population, were destroyed. At the beginning of the war, between 500 and 600 Jews lived in the town. Immediately on occupying Szydłów, the Germans robbed and plundered Jewish homes and shops. They would randomly shoot and torture Jewish men. Men were also conscripted for forced labor. In 1940, Germans forced Jews from other towns in the region into Szydłów, doubling the Jewish population. By the end of 1941, more than 1000 Jews were in Szydłów with more Jews deported there periodically. In October 1942, 150 Jews were sent to labor camps, fifteen Jews were shot in Szydłów, and the remaining Jews, then numbering about 1000, were marched to the Szczucin train station and sent to the Treblinka killing camp where they were immediately murdered. The number of Szydłów Holocaust survivors is unknown. [7] 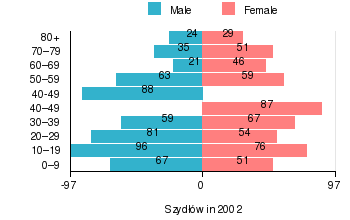