The first work on these generators was conducted by the VNIIEF centre for nuclear research in Sarov at the beginning of the 1950's, and then, independently, by LANL in the USA.

At the start of the 1950's, the need for very short and powerful electrical pulses became evident to Soviet scientists conducting nuclear fusion research. At that point in time, the Marx generator, which stores energy in capacitors, was the only device capable of producing such high power pulses. The prohibitive cost of the capacitors required to obtain the desired power motivated the search for a more economical device. The first Magneto-explosive generators, which followed from the ideas of Andreï Sakharov, were designed to fill this role. 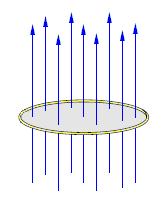 For a constant intensity magnetic field of magnitude B traversing a surface S, the flux Φ is equal to B x S.

In the following text, we will use terms like 'compression' or 'confinement' of the magnetic field. Because of the similarity between certain properties of gases and magnetic fields, the conventional use of these terms can be extended by analogy to magnetic fields. [1].

Magneto-explosive generator use a technique called 'magentic flux compression', which will be described in detail later. The technique is made possible when the timescales over which the device operates are sufficiently brief that resistive current loss is negligible, and the magnetic flux on any surface surrounded by a conductor (copper wire, for example) remains constant, even though the size and shape of the surface may change.

This flux conservation can be demonstrated from Maxwell's equations. The most intuitive explanation of this conservation of enclosed flux follows from the principle that any change in an electromagnetic system provokes an effect in order to oppose the change. For this reason, reducing the area of the surface enclosed by a conductor, which would reduce the magnetic flux, results in the induction of current in the electrical conductor, which tends to return the enclosed flux to its original value. In magneto-explosive generators, this phenomenon is obtained by various techniques which depend on powerful explosives. [2].

The compression process allows the chemical energy of the explosives to be (partially) transformed into electrical energy, using the magnetic flux as an intermediary agent of energy storage. (Note that I didn't like the catalyser argument: the magnetic field is highly dynamic, and in a sense consumes the reactant (the initial kinetic energy), even though the flux is conserved, unlike most chemical catalysts, which act mostly just to bring together the reactants in the correct configuration. A closer chemical analysis would be something like electron transport in photosynthesis, perhaps, but that really doesn't add anything useful to the discussion).

An external magnetic field (blue lines) thread a closed ring made of a perfect conductor (with zero resistivity). The nine field lines represent the magnetic flux threading the ring. Fig. 2 : Configuration after the ring's diameter has been reduced. By adding together the external magnetic field and the induced field, the final configuration after compression can be obtained; the total magnetic flux through the ring has been conserved (even though the distribution of the magnetic flux has been modified), and a current has been created in the conductive ring.

The various types of generators

The simple basic principle of flux compression can be applied in a variety of different ways. Soviet scientists at VNIIEF, poineers in this domain, conceived successively of three different types of generators[3]

Such generators can, if necessary, be utilised independently, or even assembled in a chain of succesive stages: the energy produced by each generator is transferred to the next, which amplifies the pulse, and so on. For example, it is forseen that the DEMG generator will be supplied by a MK-2 type generator.

In the spring of 1952, R.Z. Lyudaev, E.A. Feoktistova, G.A. Tsyrkov, and A.A. Chvileva undertook the first experiment with this type of generator, with the goal of obtaining a very high magnetic field.

The MK-1 generator functions as follows :

The first experiments were able to attain magnetic fields of millions of gauss, given an initial field of 30 kG.

Helical generators were principally concieved to deliver an intense current to a load situated at a safe distance. They are frequently used as the first stage of a multi-stage generator, with the exit current used to generate a very intense magnetic field in a second generator. Function of a helical generator.

The MK-2 generators function as follows :

The MK-2 generator is particularly interesting for the production of intense currents, up to 108 A, as well as a very high energy magnetic field, as up to 20 % of the explosive energy can be converted to magnetic energy, and the field strength can attain 2 × 106 Oe.

The practical realisation of high performance MK-2 systems required the pursuit of fundamental studies by a large team of researchers; this was effectively achieved by 1956, following the production of the first MK-2 generator in 1952, and the achievement of currents over 100 megaamperes from 1953. A DEMG generator functions as follows :

Systems using up to 25 modules have been developed at VNIIEF. Output of 100 MJ at 256 MA have been been produced by a generator a metre in diameter composed of 3 modules.