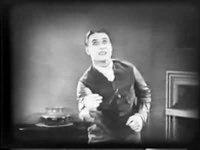 The Man on the Box is a 1925 American comedy film directed by Charles Reisner and written by Charles Logue. It is based on the 1904 novel The Man on the Box by Harold MacGrath. The film stars Sydney Chaplin, David Butler, Alice Calhoun, Cathleen Calhoun, Theodore Lorch, and Helene Costello. The film was released by Warner Bros. on October 11, 1925.[2][3][4]

Bob Warburton, a wealthy young bachelor, falls in love with Betty Annesly and, in order to be close to her, is hired as a gardener by her father, Colonel Annesley. However, the girl discovers the trick of her admirer and, to teach him a lesson, insists that the new gardener serve at the table during an important lunch. Bob refuses the task and so is replaced by Count Karloff's butler who offers, for the occasion, to lend it to the landlord. Bob realizes that Badkoff, the butler, is an enemy agent tasked with stealing secret helicopter plans from Betty's father. Disguised as a waitress, Bob puts a spoke in the wheel of the spy, saving the precious documents. Eventually, he also wins over beautiful Betty, taking her to the altar.

More
The Man on the Box (1925 film)at Wikipedia's sister projects
Films directed by Charles Reisner
Categories
Categories:
{{bottomLinkPreText}} {{bottomLinkText}}
This page is based on a Wikipedia article written by contributors (read/edit).
Text is available under the CC BY-SA 4.0 license; additional terms may apply.
Images, videos and audio are available under their respective licenses.