For faster navigation, this Iframe is preloading the Wikiwand page for Northern Territory. 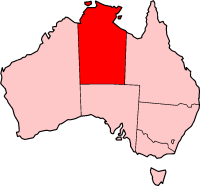 The Northern Territory is a territory of Australia. The capital city is Darwin. Other large towns in the Territory include Alice Springs, Katherine and Tennant Creek.

The Northern Territory has large areas of desert. It has many important places such as Uluru, or Ayers Rock. The rock is sacred to the native people.

Kakadu National Park is a World Heritage area. It has been lived in for more than 40,000 years. There are cave paintings, rock carvings and archaeological sites. These show the skills and way of life of the people who have lived there. The park has different ecosystems, including tidal flats, floodplains, lowlands and rocky gorges. It provides a place to live for a wide range of rare types of plants and animals.[1]

NT Flag with the Desert Rose

The floral emblem of the Northern Territory is Sturt's Desert Rose, Gossypium sturtianum.[2] The flower is also featured on the Territory's flag. It was named after explorer Charles Sturt who found the plant in creeks near the site of Broken Hill, New South Wales in 1844. The Fauna emblem is the Red Kangaroo.

This short article about a place or feature can be made longer. You can help Wikipedia by adding to it.
Category
Category:
{{bottomLinkPreText}} {{bottomLinkText}}
This page is based on a Wikipedia article written by contributors (read/edit).
Text is available under the CC BY-SA 4.0 license; additional terms may apply.
Images, videos and audio are available under their respective licenses.