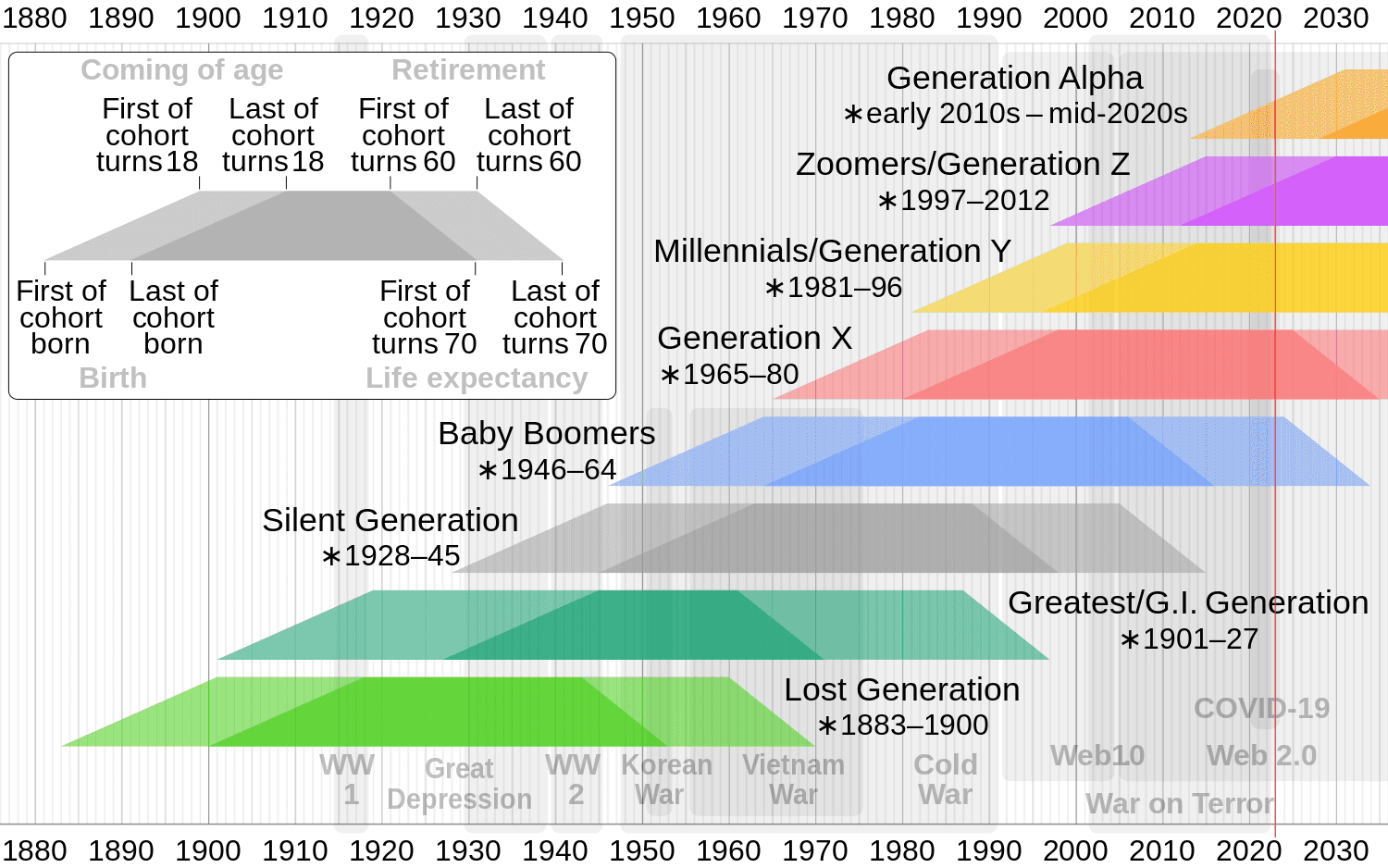 Baby boomers, often shortened to boomers, are the demographic cohort following the Silent Generation and preceding Generation X. The generation is often defined as people born from 1946 to 1964, during the mid-20th century baby boom.[1] The dates, the demographic context, and the cultural identifiers may vary by country.[2][3][4][5] The baby boom has been described variously as a "shockwave"[6] and as "the pig in the python".[7][8] Most baby boomers are children of either the Greatest Generation or the Silent Generation, and are often parents of Gen Xers and Millennials.[9]

In the West, boomers' childhoods in the 1950s and 1960s had significant reforms in education, both as part of the ideological confrontation that was the Cold War,[10][11] and as a continuation of the interwar period.[12][13] In the 1960s and 1970s, as this relatively large number of young people entered their teens and young adulthood—the oldest turned 18 in 1964—they, and those around them, created a very specific rhetoric around their cohort,[14] and the social movements brought about by their size in numbers, such as the counterculture of the 1960s[15] and its backlash.[16]

In many countries, this period was one of deep political instability due to the postwar youth bulge.[16][17] In China, boomers lived through the Cultural Revolution and were subject to the one-child policy as adults.[18] These social changes and rhetoric had an important impact in the perceptions of the boomers, as well as society's increasingly common tendency to define the world in terms of generations, which was a relatively new phenomenon. This group reached puberty and maximum height earlier than previous generations.[19]

In Europe and North America, many boomers came of age in a time of increasing affluence and widespread government subsidies in postwar housing and education,[6] and grew up genuinely expecting the world to improve with time.[7] Those with higher standards of living and educational levels were often the most demanding of betterment.[16][20] In the early 21st century, baby boomers in some developed countries are the single biggest cohort in their societies due to subreplacement fertility and population aging.[21] In the United States, they are the second most numerous age demographic after millennials.[22]