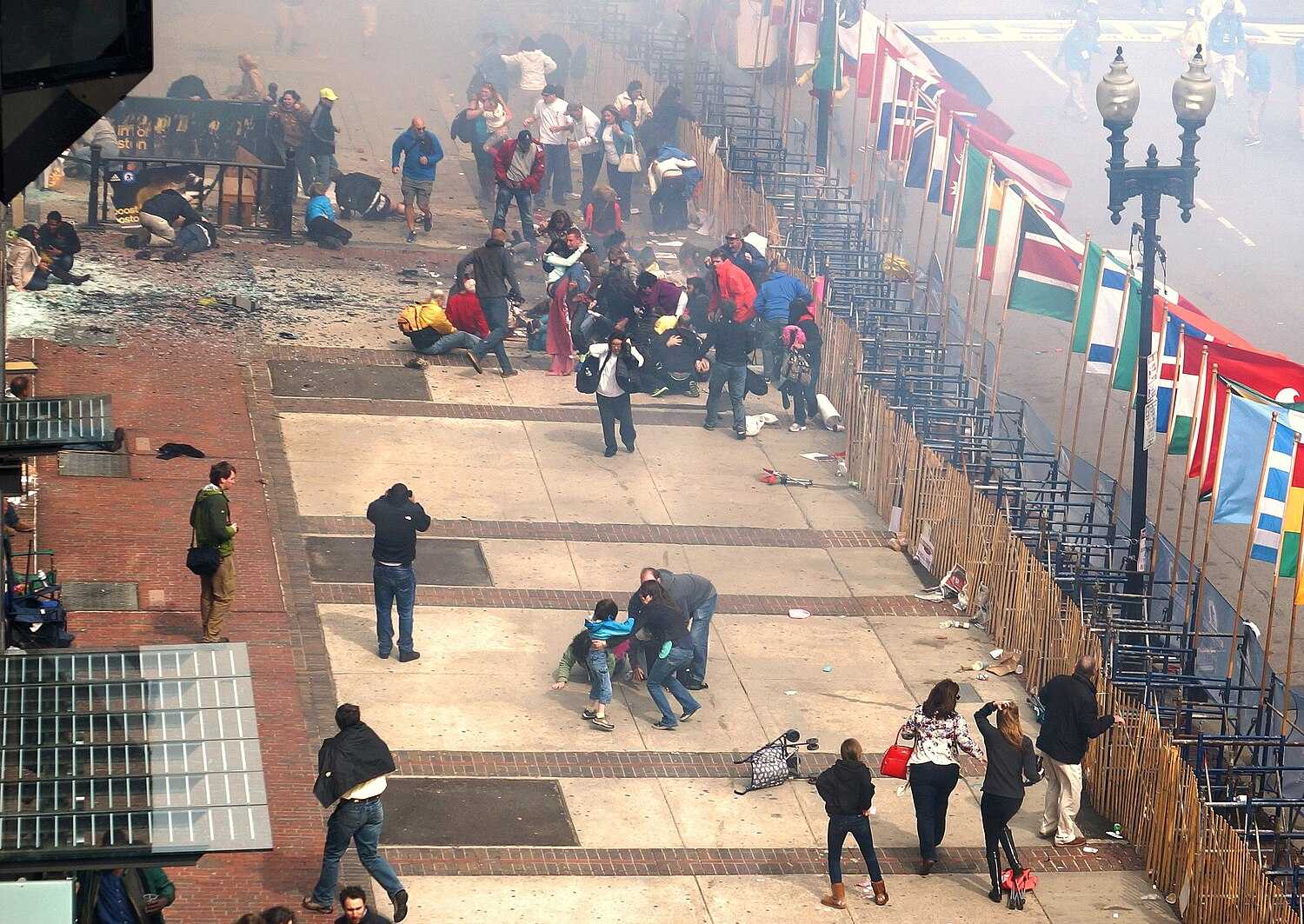 The Boston Marathon bombing was a domestic terrorist attack that took place during the annual Boston Marathon on April 15, 2013. Two terrorists, brothers Dzhokhar Tsarnaev and Tamerlan Tsarnaev, planted two homemade pressure cooker bombs, which detonated 14 seconds and 210 yards (190 m) apart at 2:49 p.m., near the finish line of the race, killing three people and injuring hundreds of others, including 17 who lost limbs.[1][4][5]

Three days later, on April 18, Federal Bureau of Investigation (FBI) released images of two suspects.[6][7][8] They were later identified as the Tsarnaev brothers, who were Chechen Kyrgyzstani-Americans. Following their identification, at 10:35 p.m., they killed an MIT policeman. At 11:00 p.m., they kidnapped a man in his car. At 12:15 a.m., on April 19, the man escaped. At 12:45 a.m., they had a shootout with the police in nearby Watertown, during which two officers were severely injured (one of whom, DJ Simmonds, died a year later). Tamerlan was shot several times, and his brother Dzhokhar ran him over while escaping in the stolen car. Tamerlan died soon after.

An unprecedented manhunt for Dzhokhar ensued with thousands of law enforcement officers searching a 20-block area of Watertown.[9] Residents of Watertown and surrounding communities were asked to stay indoors, and the transportation system and most businesses and public places closed.[10][11] Around 6:00 p.m., a Watertown resident discovered Dzhokhar hiding in a boat in his backyard.[12] Dzhokhar was shot and wounded by police before being taken into custody.[13]

During questioning, Dzhokhar said that he and his brother were motivated by the wars in Iraq and Afghanistan, that they were self-radicalized and unconnected to any outside terrorist groups, and that he was following his brother's lead. He said they learned to build explosive devices from the online magazine of Al-Qaeda in the Arabian Peninsula.[14] He also said they had intended to travel to New York City to bomb Times Square. On April 8, 2015, he was convicted of 30 charges, including use of a weapon of mass destruction and malicious destruction of property resulting in death.[15][16][17]

Two months later, he was sentenced to death,[18] though in July 2020 the sentence was vacated by the United States Court of Appeals for the First Circuit.[19] On March 22, 2021, a writ of certiorari was granted by the Supreme Court of the United States, which considered the questions of whether the lower court erred in vacating the death sentence. The Supreme Court heard arguments on October 13, 2021, as United States v. Tsarnaev; on March 4, 2022, the Court upheld the death penalty, reversing the First Circuit Court's decision.[20][21]