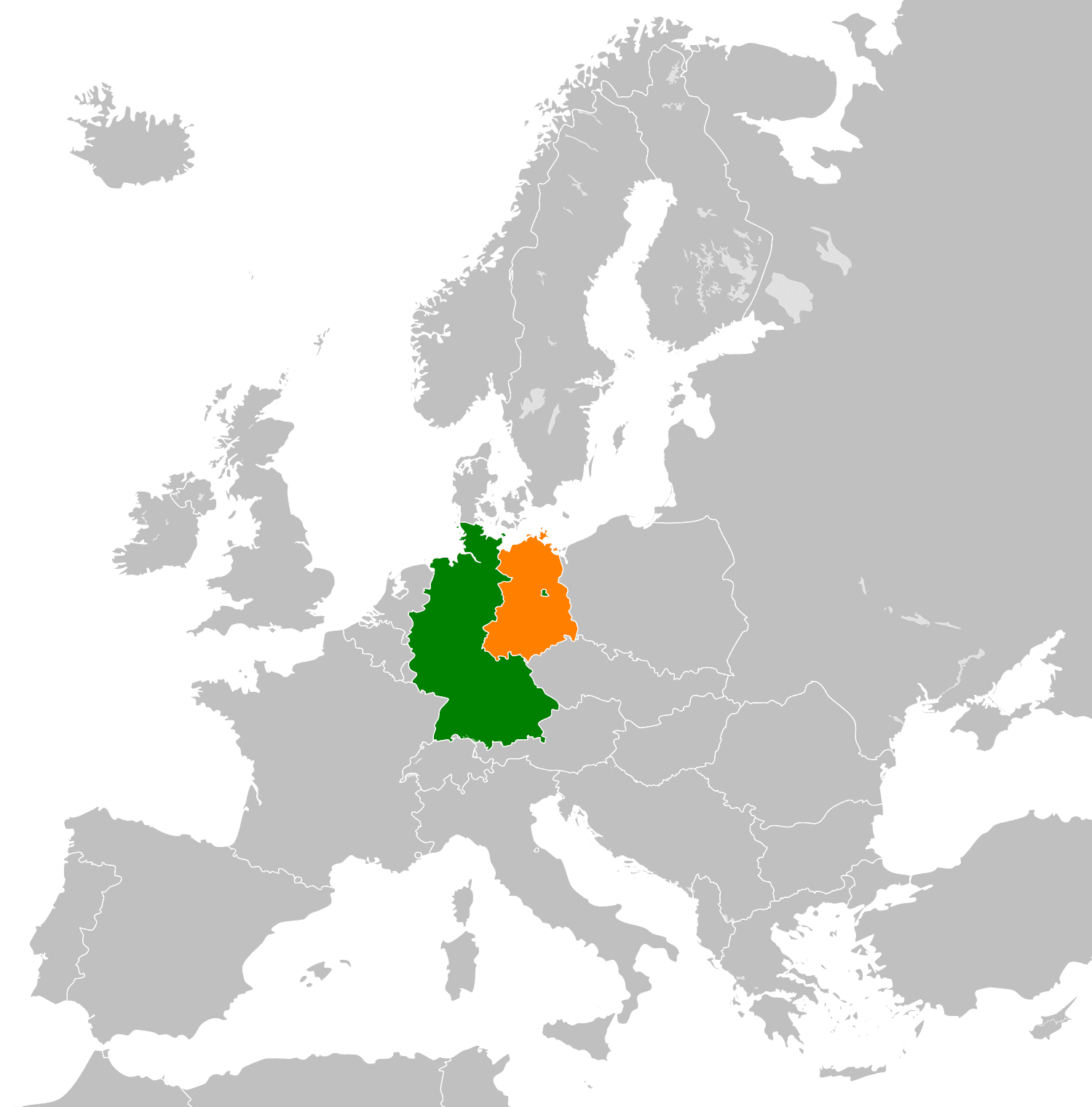 German reunification (German: Deutsche Wiedervereinigung) was the process of re-establishing Germany as a single sovereign state, which took place between 2 May 1989 and 15 March 1991. The day of 3 October 1990 when the "Unification Treaty" between the two countries of "Germany as a whole"[lower-alpha 1] entered into force dissolving the German Democratic Republic (GDR; German: Deutsche Demokratische Republik, DDR, or East Germany) and integrating its recently re-established constituent federated states into the Federal Republic of Germany (FRG; German: Bundesrepublik Deutschland, BRD, or West Germany) to form present-day Germany, has been chosen as the customary German Unity Day (Tag der deutschen Einheit) and has thereafter been celebrated each year as a national holiday in Germany since 1991.[1] As part of the reunification, East and West Berlin of the two countries were also united into a single city; it eventually became the capital of the country.

1989–1991 unification process of Germany with its full sovereignty

The East German government led by the Socialist Unity Party of Germany (SED) (a communist party) started to falter on 2 May 1989, when the removal of Hungary's border fence with Austria opened a hole in the Iron Curtain. The border was still closely guarded, but the Pan-European Picnic and the indecisive reaction of the rulers of the Eastern Bloc set in motion an irreversible movement.[2][3] It allowed an exodus of thousands of East Germans fleeing to West Germany via Hungary. The Peaceful Revolution, a part of the international Revolutions of 1989 and a series of protests by the East Germans, led to the GDR's first free elections on 18 March 1990 and to the negotiations between the two countries that culminated in a Unification Treaty.[1] Other negotiations between the two German countries and the four occupied powers in Germany produced the so-called "Two Plus Four Treaty" (Treaty on the Final Settlement with Respect to Germany), granting on 15 March 1991 full sovereignty to a reunified German state, whose two parts were previously bound by a number of limitations stemming from their post-World War II status as occupation zones, though only on 31 August 1994 did the last Russian occupation troops (Russia is the successor of the Soviet Union) leave Germany.

After the end of World War II in Europe, the Berlin Declaration was signed and Germany was commonly occupied by the four Allied countries; later the Potsdam Agreement was also signed, leading to the German division, a full peace treaty concluding World War II for Germany was planned via its–including the exact delimitation of Germany's post-war boundary and this was required to be "accepted by the Government of Germany when a government adequate for the purpose is established." The geopolitical tension between the occupied Allies de facto ended the "Four Powers", and their intention to establish a new government for all of Germany then two countries was founded. The American, British, and French zones combined to form the FRG i.e. West Germany on 23 May 1949. The GDR i.e. East Germany was established in the Soviet zone on 7 October 1949, which means that Germany had been divided into the two independent territories since then. With the co-existence of two German states, West Germany maintained that no such government could be said to have been established until the two states had been united into one Germany within a free and democratic state. The West German government of chancellor Konrad Adenauer had rejected the 1952 Stalin Note sent to the three Western Allies to unify two Germanies into one under terms of neutrality. The government instead pursued a policy of West German rearmament while ending the process of denazification and declaring an amnesty, because West Germans did not trust the Soviets about a "neutral Germany" after the reunification. This led to the 1952 establishment of the Western European Union, and West German state joined NATO in 1955. In 1990, a range of opinions continued to be maintained over whether a reunited Germany could be said to represent "Germany as a whole" for this purpose. In the context of the successful and international Revolutions of 1989 against the communist states, including in the GDR; on 12 September 1990, under the Two Plus Four Treaty with the four Allies, both East and West Germany committed to the principle that their joint pre-1990 boundary constituted the entire territory that could be claimed by a government of Germany, and hence that there were no further lands outside this boundary that were parts of Germany as a whole occupied. East Germany re-established the federated states on its soil and subsequently dissolved itself on 3 October 1990; also on the same day, modern Germany was formed when the new states joined the FRG while East and West Berlin united into German capital.

The reunited state is not a successor state, but an enlarged continuation of the 1949–1990 West German state. The enlarged Federal Republic of Germany retained the West German seats in the governing bodies of the European Economic Community (EC) (later the European Union/EU) and in international organizations including the North Atlantic Treaty Organization (NATO) and the United Nations (UN), while reliquinshing membership in the Warsaw Pact (WP) and other international organizations to which East Germany belonged.