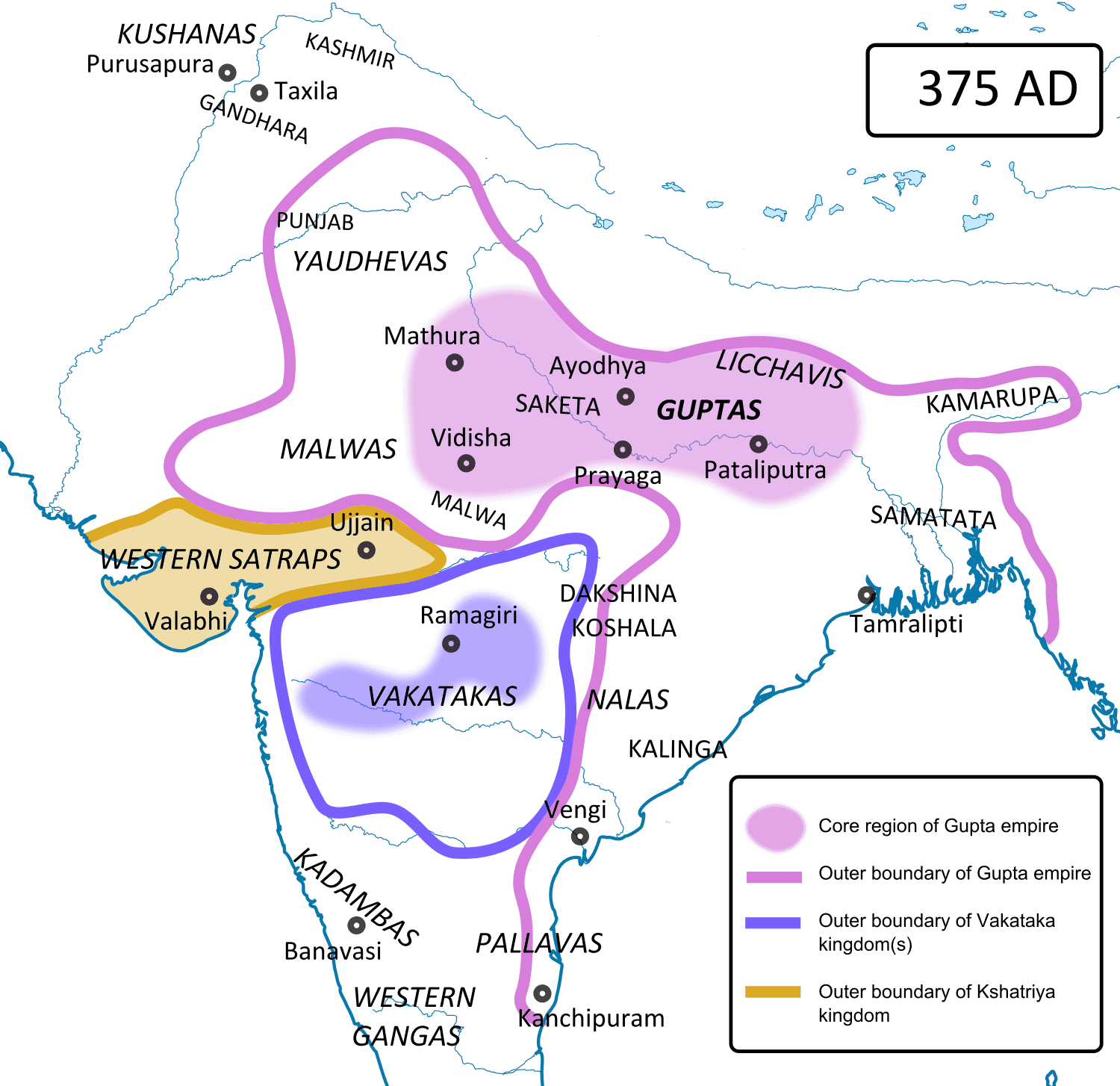 The Gupta Empire was an ancient Indian empire which existed from the early 4th century CE to late 6th century CE. At its zenith, from approximately 319 to 467 CE, it covered much of the Indian subcontinent.[3] This period is considered as the Golden Age of India by historians.[4][note 1] The ruling dynasty of the empire was founded by the king Sri Gupta; the most notable rulers of the dynasty were Chandragupta I, Samudragupta, Chandragupta II and Skandagupta. The 5th-century CE Sanskrit poet Kalidasa credits the Guptas with having conquered about twenty-one kingdoms, both in and outside India, including the kingdoms of Parasikas, the Hunas, the Kambojas, tribes located in the west and east Oxus valleys, the Kinnaras, Kiratas, and others.[6][7][8]

The high points of this period are the great cultural developments which took place primarily during the reigns of Samudragupta, Chandragupta II and Kumaragupta I. Many Hindu epics and literary sources, such as Mahabharata and Ramayana, were canonised during this period.[9] The Gupta period produced scholars such as Kalidasa,[10] Aryabhata, Varahamihira, and Vatsyayana who made great advancements in many academic fields.[11][12][13] Science and political administration reached new heights during the Gupta era.[12] The period gave rise to achievements in architecture, sculpture, and painting that "set standards of form and taste [that] determined the whole subsequent course of art, not only in India but far beyond her borders".[14] Strong trade ties also made the region an important cultural centre and established the region as a base that would influence nearby kingdoms and regions in India and Southeast Asia.[15][unreliable source?] The Puranas, earlier long poems on a variety of subjects, are also thought to have been committed to written texts around this period.[14][16] Hinduism was followed by the rulers and the Brahmins flourished in the Gupta empire but the Guptas tolerated people of other faiths as well.[17]

The empire eventually died out because of factors such as substantial loss of territory and imperial authority caused by their own erstwhile feudatories, as well as the invasion by the Huna peoples (Kidarites and Alchon Huns) from Central Asia.[18][19] After the collapse of the Gupta Empire in the 6th century, India was again ruled by numerous regional kingdoms.