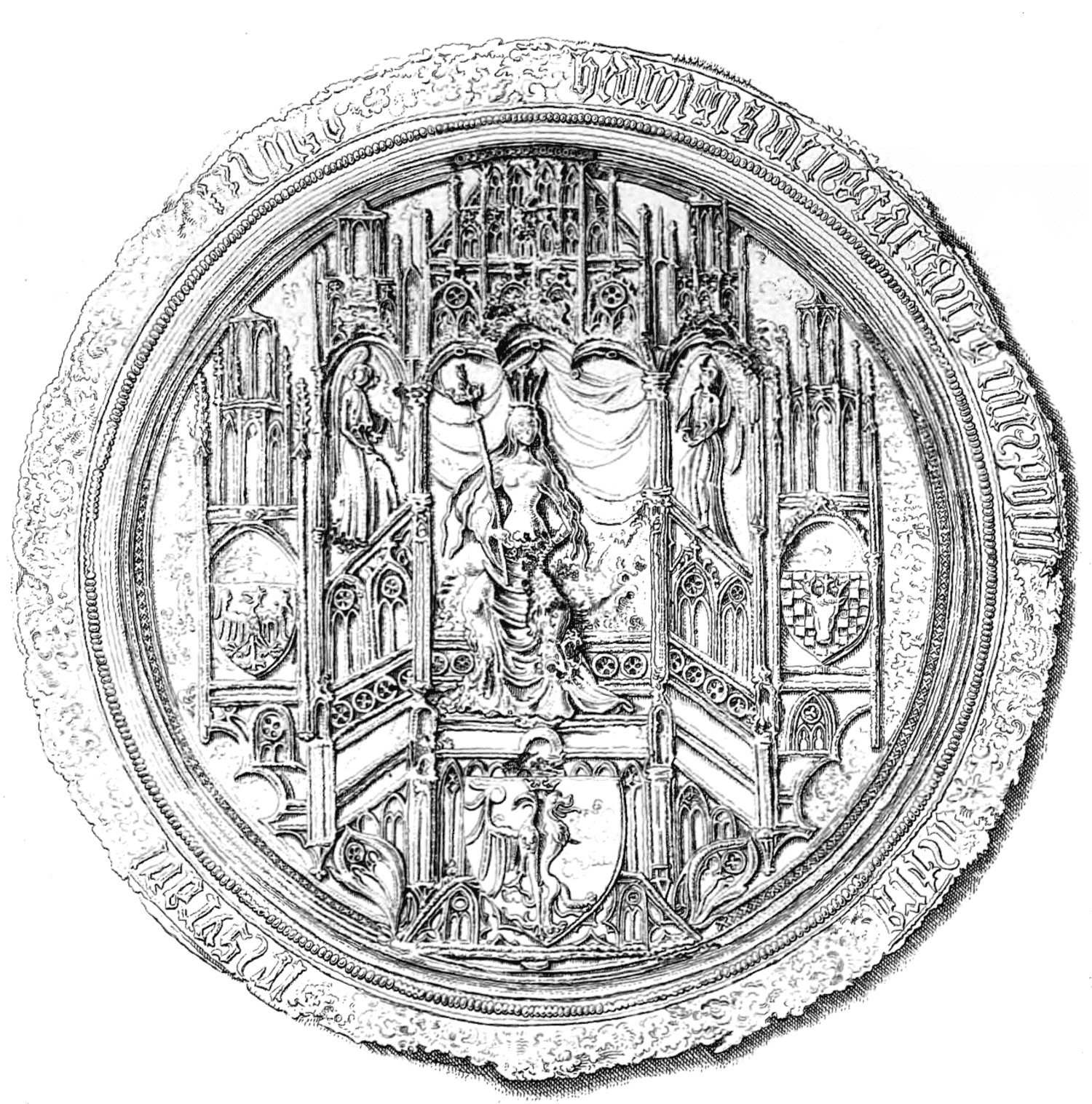 listen); 1373 or 1374 – 17 July 1399), also known as Hedwig (Hungarian: Hedvig), was the first woman to be crowned as monarch of the Kingdom of Poland. She reigned from 16 October 1384 until her death. She was the youngest daughter of Louis the Great, King of Hungary and Poland, and his wife, Elizabeth of Bosnia. Jadwiga was a member of the Capetian House of Anjou, but she had more close forebears among the Polish Piasts than among the Angevins.

In 1375, it was planned that when becoming old enough, she would marry William of Austria and she lived in Vienna from 1378 to 1380. Jadwiga's father is thought to have regarded her and William as his favoured successors in Hungary after the 1379 death of her eldest sister, Catherine, since that same year the Polish nobility had pledged their homage to Louis' second daughter, Mary, and Mary's fiancé, Sigismund of Luxembourg. However, Louis died, and in 1382, at her mother's insistence, Mary was crowned "King of Hungary". Sigismund of Luxembourg tried to take control of Poland, but the Polish nobility countered that they would be obedient to a daughter of King Louis only if she settled in Poland.

Queen Elizabeth then chose Jadwiga to reign in Poland, but did not send her to Kraków to be crowned. During the interregnum, Siemowit IV, Duke of Masovia, became a candidate for the Polish throne. The nobility of Greater Poland favored him and proposed that he marry Jadwiga. However, Lesser Poland's nobility opposed him, and they persuaded Queen Elizabeth to send Jadwiga to Poland.

Jadwiga was crowned king in Poland's capital, Kraków, on 16 October 1384. Her coronation either reflected the Polish nobility's opposition to her intended husband, William, becoming king without further negotiation, or simply, emphasized her status as the monarch. With her mother's consent, Jadwiga's advisors opened negotiations with Jogaila, Grand Duke of Lithuania, who was still a pagan, concerning his potential marriage to Jadwiga. Jogaila signed the Union of Krewo, pledging to convert to Catholicism and to promote conversion of his pagan subjects. Meanwhile, William hastened to Kraków, hoping to marry his childhood fiancé, Jadwiga, but in late August 1385 the Polish nobles expelled him.

Jogaila, who took the Catholic baptismal name Władysław, married Jadwiga on 15 February 1386. Legend says that she had agreed to marry him only after lengthy prayer, seeking divine inspiration. Jogaila, now styled in Polish as, Władysław Jagiełło, was crowned King of Poland on 4 March 1386 as Jadwiga's co-ruler. Jagiełło worked closely with his wife in that role. In any case, her real political power was limited.

After rebellious nobles of the Kingdom of Hungary-Croatia had murdered her mother in early 1387, Jadwiga marched into the Kingdom of Galicia–Volhynia, which had been under Hungarian rule, and persuaded most of the inhabitants to become subjects of the Polish Crown. She mediated between her husband's quarreling kin and between Poland and the Teutonic Order.

After her sister Mary died in 1395, Jadwiga and Jagiełło laid claim to Hungary against the widowed Sigismund of Luxembourg, but the Hungarian lords failed to support their claim and Sigismund easily retained his Hungarian throne. Jadwiga died four years later due to postpartum complications.

In 1997, Jadwiga was canonized by the Catholic Church.