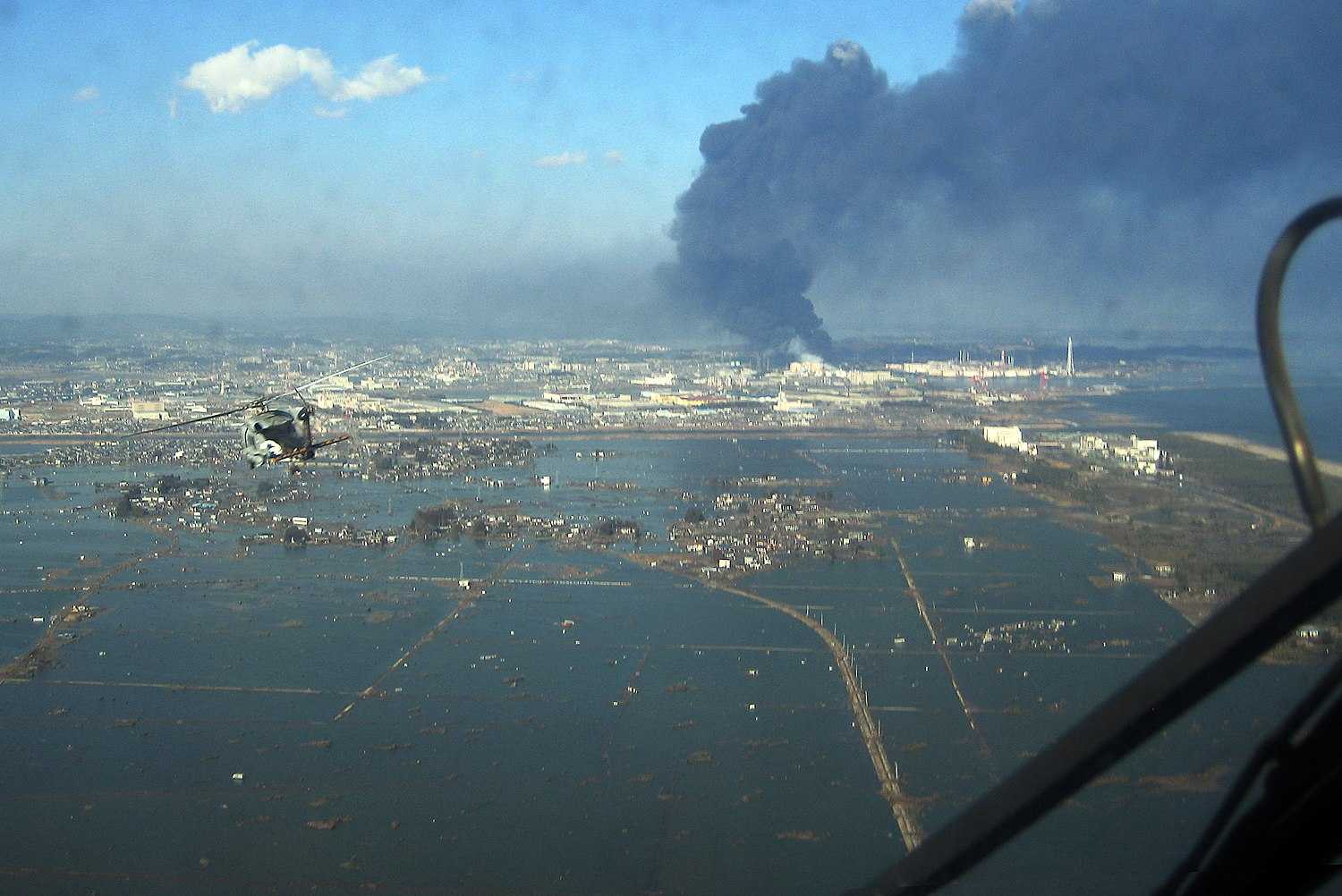 The 2011 Tōhoku earthquake and tsunami (Japanese: 東北地方太平洋沖地震, Hepburn: Tōhoku-chihō Taiheiyō Oki Jishin) occurred at 14:46 JST (05:46 UTC) on 11 March. The magnitude 9.0–9.1 (Mw) undersea megathrust earthquake had an epicenter in the Pacific Ocean, 72 km (45 mi) east of the Oshika Peninsula of the Tōhoku region, and lasted approximately six minutes, causing a tsunami. It is sometimes known in Japan as the "Great East Japan Earthquake" (東日本大震災, Higashi nihon daishinsai), among other names.[en 1] The disaster is often referred to in both Japanese and English as simply 3.11 (read san ten ichi-ichi in Japanese).[29][30][31]

It was the most powerful earthquake ever recorded in Japan, and the fourth most powerful earthquake in the world since modern record-keeping began in 1900.[32][33][34] The earthquake triggered powerful tsunami waves that may have reached heights of up to 40.5 meters (133 ft) in Miyako in Tōhoku's Iwate Prefecture,[35][36] and which, in the Sendai area, traveled at 700 km/h (435 mph)[37] and up to 10 km (6 mi) inland.[38] Residents of Sendai had only eight to ten minutes of warning, and more than a hundred evacuation sites were washed away.[37] The snowfall which accompanied the tsunami[39] and the freezing temperature hindered rescue works greatly;[40] for instance, Ishinomaki, the city with most deaths,[41] was 0 °C (32 °F) as the tsunami hit.[42] The official figures released in 2021 reported 19,759 deaths,[43] 6,242 injured,[44] and 2,553 people missing[45], and a report from 2015 indicated 228,863 people were still living away from their home in either temporary housing or due to permanent relocation.[46]

The tsunami caused the Fukushima Daiichi nuclear disaster, primarily the meltdowns of three of its reactors, the discharge of radioactive water in Fukushima and the associated evacuation zones affecting hundreds of thousands of residents.[47][48] Many electrical generators ran out of fuel. The loss of electrical power halted cooling systems, causing heat to build up. The heat build-up caused the generation of hydrogen gas. Without ventilation, gas accumulated within the upper refueling hall and eventually exploded causing the refueling hall's blast panels to be forcefully ejected from the structure. Residents within a 20 km (12 mi) radius of the Fukushima Daiichi Nuclear Power Plant and a 10 km (6.2 mi) radius of the Fukushima Daini Nuclear Power Plant were evacuated.

Early estimates placed insured losses from the earthquake alone at US$14.5 to $34.6 billion.[49] The Bank of Japan offered ¥15 trillion (US$183 billion) to the banking system on 14 March 2011 in an effort to normalize market conditions.[50] The World Bank's estimated economic cost was US$235 billion, making it the costliest natural disaster in history.[51][52] According to a 2020 study, "the earthquake and its aftermaths resulted in a 0.47 percentage point decline in Japan's real GDP growth in the year following the disaster."[53]