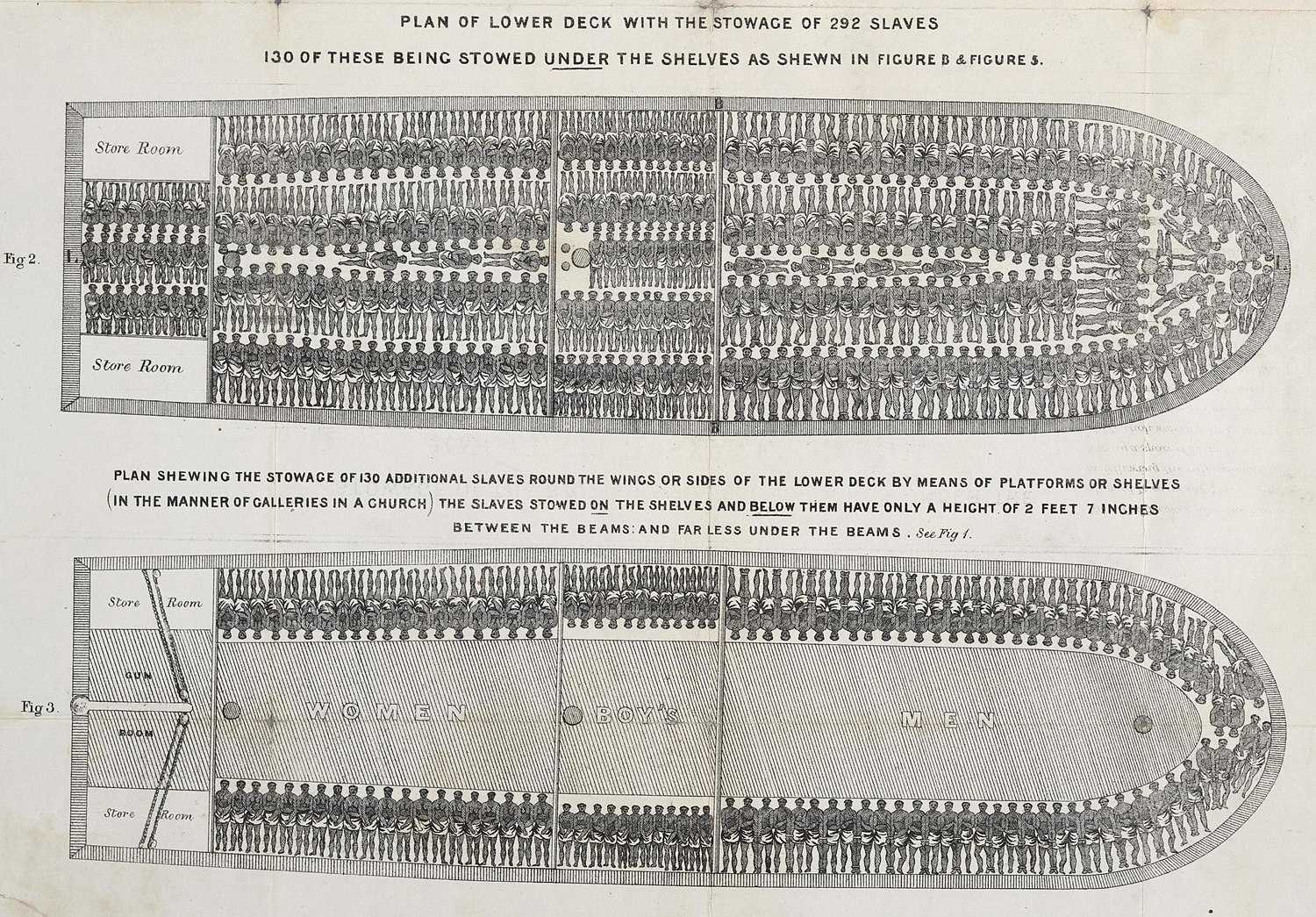 The Atlantic slave trade, transatlantic slave trade, or Euro-American slave trade involved the transportation by slave traders of enslaved African people, mainly to the Americas. The slave trade regularly used the triangular trade route and its Middle Passage, and existed from the 16th to the 19th centuries.[1] The vast majority of those who were transported in the transatlantic slave trade were people from Central and West Africa that had been sold by other West Africans to Western European slave traders,[2][3][4] while others had been captured directly by the slave traders in coastal raids;[5] Europeans gathered and imprisoned the enslaved at forts on the African coast and then brought them to the Americas.[6][7] Except for the Portuguese, European slave traders generally did not participate in the raids because life expectancy for Europeans in sub-Saharan Africa was less than one year during the period of the slave trade (which was prior to the widespread availability of quinine as a treatment for malaria).[3] The colonial South Atlantic and Caribbean economies were particularly dependent on labour for the production of sugarcane and other commodities. This was viewed as crucial by those Western European states which, in the late 17th and 18th centuries, were vying with one another to create overseas empires.[8]

The Portuguese, in the 16th century, were the first to buy slaves from West African slavers and transport them across the Atlantic. In 1526, they completed the first transatlantic slave voyage to Brazil, and other Europeans soon followed.[9] Shipowners regarded the slaves as cargo to be transported to the Americas as quickly and cheaply as possible,[8] there to be sold to work on coffee, tobacco, cocoa, sugar, and cotton plantations, gold and silver mines, rice fields, the construction industry, cutting timber for ships, as skilled labour, and as domestic servants.[10] The first Africans kidnapped to the English colonies were classified as indentured servants, with legal standing similar to that of contract-based workers coming from Britain and Ireland. However, by the middle of the 17th century, slavery had hardened as a racial caste, with African slaves and their future offspring being legally the property of their owners, as children born to slave mothers were also slaves (partus sequitur ventrem). As property, the people were considered merchandise or units of labour, and were sold at markets with other goods and services.

The major Atlantic slave-trading nations, in order of trade volume, were Portugal, Britain, Spain, France, the Netherlands, and Denmark. Several had established outposts on the African coast where they purchased slaves from local African leaders.[11] These slaves were managed by a factor, who was established on or near the coast to expedite the shipping of slaves to the New World. Slaves were imprisoned in a factory while awaiting shipment. Current estimates are that about 12 million to 12.8 million Africans were shipped across the Atlantic over a span of 400 years.[12][13]: 194  The number purchased by the traders was considerably higher, as the passage had a high death rate with approximately 1.2–2.4 million dying during the voyage and millions more in seasoning camps in the Caribbean after arrival in the New World. Millions of people also died as a result of slave raids, wars, and during transport to the coast for sale to European slave traders.[14][15][16][17] Near the beginning of the 19th century, various governments acted to ban the trade, although illegal smuggling still occurred. In the early 21st century, several governments issued apologies for the transatlantic slave trade.