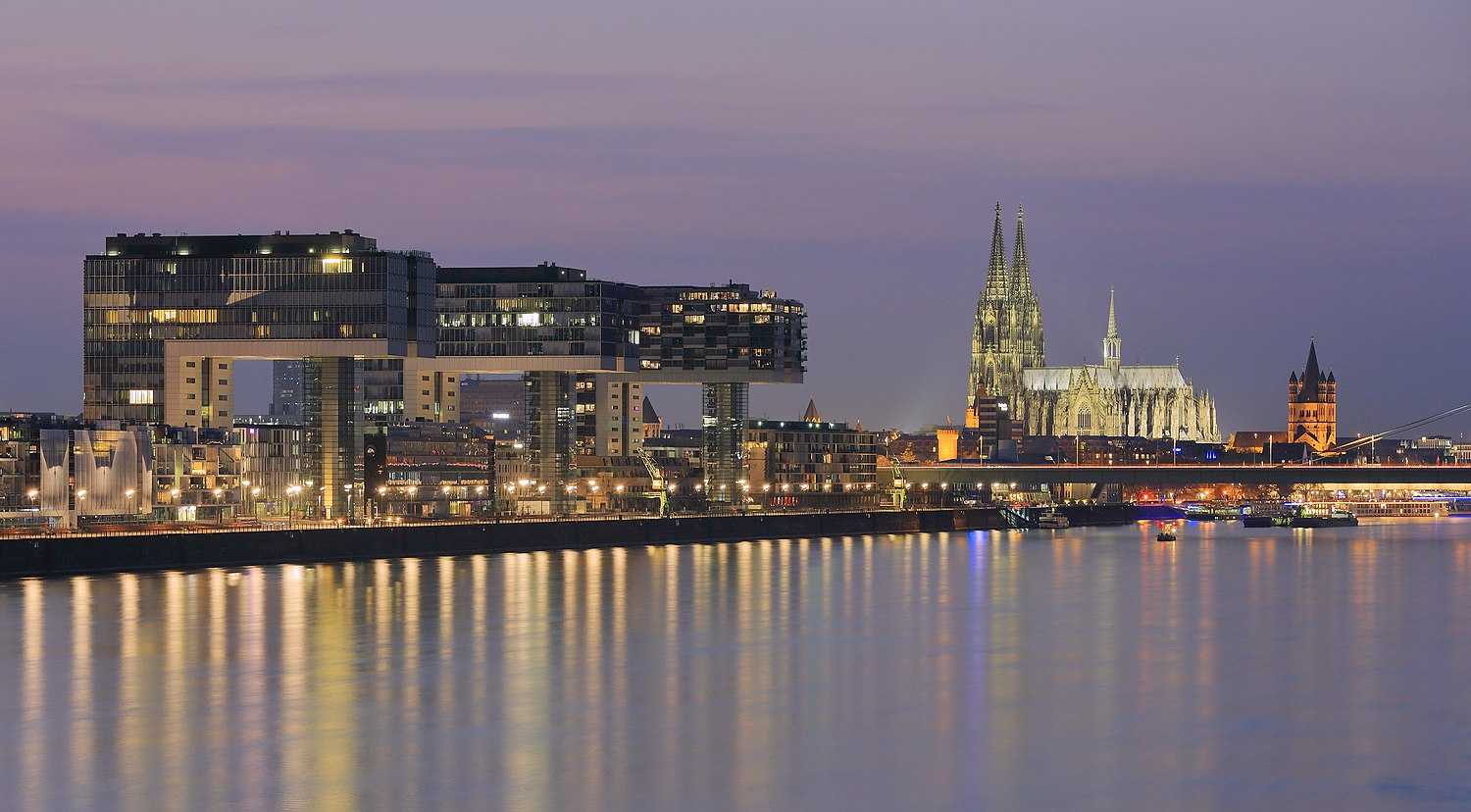 listen)) is the largest city of the German western state of North Rhine-Westphalia (NRW) and the fourth-most populous city of Germany with 1.1 million inhabitants in the city proper and 3.6 million people in the urban region. Centered on the left (west) bank of the Rhine, Cologne is about 35 km (22 mi) southeast of NRW's state capital Düsseldorf and 25 km (16 mi) northwest of Bonn, the former capital of West Germany.

The city's medieval Catholic Cologne Cathedral (Kölner Dom), the third-tallest church and tallest cathedral in the world, constructed to house the Shrine of the Three Kings, is a globally recognized landmark and one of the most visited sights and pilgrimage destinations in Europe. The cityscape is further shaped by the Twelve Romanesque churches of Cologne, and Cologne is famous for Eau de Cologne, that has been produced in the city since 1709, and "cologne" has since come to be a generic term.

Cologne was founded and established in Germanic Ubii territory in the 1st century CE as the Roman Colonia Agrippina, hence its name.[3] Agrippina was later dropped (except in Latin), and Colonia became the name of the city in its own right, which developed into modern German as Köln. Cologne, the French version of the city's name, has become standard in English as well. Cologne functioned as the capital of the Roman province of Germania Inferior and as the headquarters of the Roman military in the region until occupied by the Franks in 462. During the Middle Ages the city flourished as being located on one of the most important major trade routes between east and western Europe (including the Brabant Road, Via Regia and Publica). Cologne was a free imperial city of the Holy Roman Empire and one of the major members of the trade union Hanseatic League. It was one of the largest European cities in medieval and renaissance times.

Prior to World War II, the city had undergone occupations by the French (1794–1815) and the British (1918–1926), and was part of Prussia beginning in 1815. Cologne was one of the most heavily bombed cities in Germany during World War II.[4] The bombing reduced the population by 93% mainly due to evacuation, and destroyed almost the entire millennia-old city center. The post-war rebuilding has resulted in a very mixed cityscape, restoring only major historic landmarks like city gates and churches (31 of them being Romanesque).

Cologne is a major cultural center for the Rhineland; it hosts more than 30 museums and hundreds of galleries. There are many institutions of higher education, most notably the University of Cologne, one of Europe's oldest and largest universities;[5] the Technical University of Cologne, Germany's largest university of applied sciences; and the German Sport University Cologne. It hosts three Max Planck science institutes and is a major research hub for the aerospace industry, with the German Aerospace Center and the European Astronaut Centre headquarters. It also has significant chemical and automobile industry. Cologne Bonn Airport is a regional hub, the main airport for the region being Düsseldorf Airport. The Cologne Trade Fair hosts a number of trade shows.