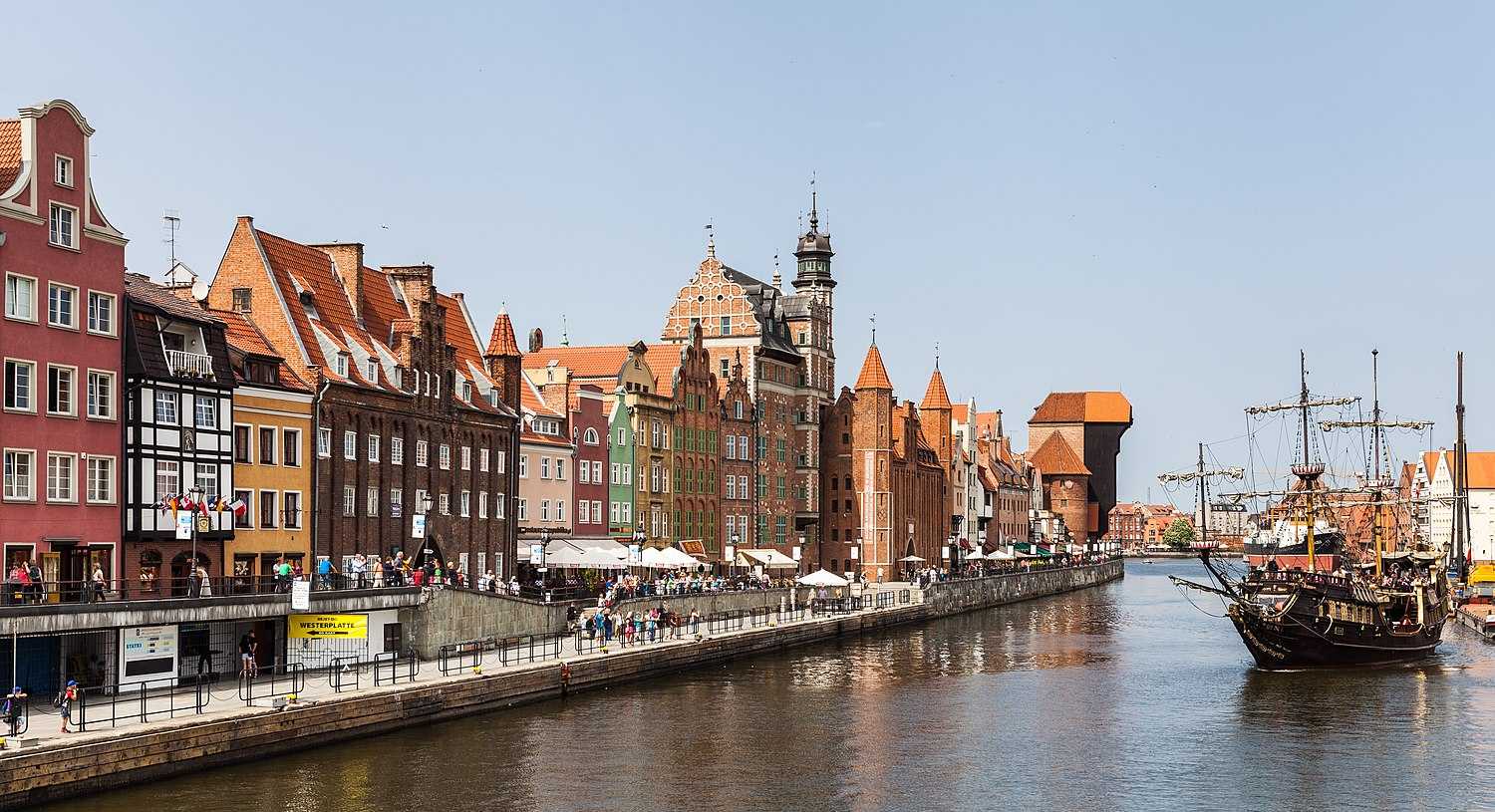 listen); Kashubian: Gduńsk;[3] Latin: Gedanum, Dantiscum[4])[lower-alpha 1] is a city on the Baltic coast of northern Poland. With a population of 470,621,[1] Gdańsk is the capital and largest city of the Pomeranian Voivodeship. It is Poland's principal seaport and the country's fourth-largest metropolitan area.[6]

The city lies at the southern edge of Gdańsk Bay, close to the city of Gdynia and resort town of Sopot; these form a metropolitan area called the Tricity (Trójmiasto), with a population of approximately 1.5 million.[7] Gdańsk lies at the mouth of the Motława River, connected to the Leniwka, a branch in the delta of the Vistula River, which connects Gdańsk with the Polish capital Warsaw.

The city's history is complex, with periods of Polish, Prussian and German rule, and autonomy as the Free City of Danzig. An important shipbuilding and trade port since the Middle Ages, in 1361 it became a member of the Hanseatic League which defined its economic, demographic and urban landscape for several centuries. In 16th century, Gdańsk experienced its Golden Age and thanks to its grain exports became one of the wealthiest cities in Europe.[8] From 1918 to 1939, Gdańsk lay in the disputed Polish Corridor between Poland and Germany; its ambiguous political status created tensions that culminated in the Invasion of Poland and the first clash of the Second World War at nearby Westerplatte. The contemporary city was shaped by extensive border changes, expulsions and new settlement after 1945. In the 1980s, Gdańsk was the birthplace of the Solidarity movement, which played a major role in bringing an end to Communism in Poland and helped precipitate the collapse of the Eastern Bloc, the fall of the Berlin Wall and the dissolution of the Warsaw Pact.

Gdańsk is home to the University of Gdańsk, Gdańsk University of Technology, the National Museum, the Gdańsk Shakespeare Theatre, the Museum of the Second World War, the Polish Baltic Philharmonic and the European Solidarity Centre. Among Gdańsk's most notable historical landmarks are the Town Hall, the Green Gate, Artus Court, Neptune's Fountain, and St. Mary's Church, one of the largest brick churches in the world. The city is served by Gdańsk Lech Wałęsa Airport, the country's third busiest airport and the most important international airport in northern Poland. Companies headquartered in Gdańsk include energy provider Energa SA and clothing retailer LPP.

The city also hosts St. Dominic's Fair, which dates back to 1260,[9] and is regarded as one of the biggest trade and cultural events in Europe.[10] Gdańsk has also topped rankings for the quality of life, safety and living standards worldwide, and its historic city center has been listed as one of Poland's national monuments.[11][12][13][14]