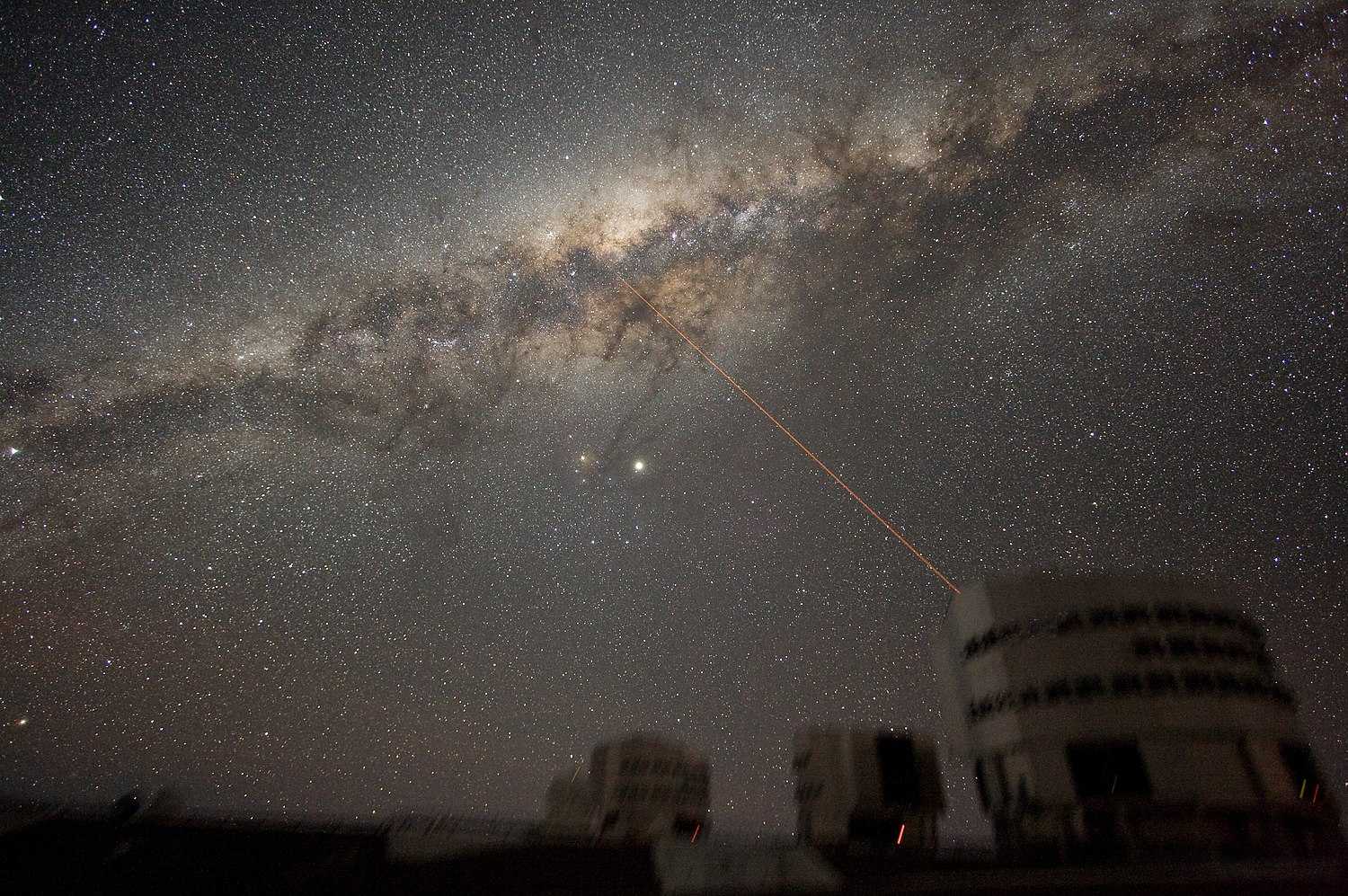 The Milky Way[lower-alpha 3] is the galaxy that includes the Solar System, with the name describing the galaxy's appearance from Earth: a hazy band of light seen in the night sky formed from stars that cannot be individually distinguished by the naked eye. The term Milky Way is a translation of the Latin via lactea, from the Greek γαλακτικός κύκλος (galaktikos kýklos), meaning "milky circle".[24][25] From Earth, the Milky Way appears as a band because its disk-shaped structure is viewed from within. Galileo Galilei first resolved the band of light into individual stars with his telescope in 1610. Until the early 1920s, most astronomers thought that the Milky Way contained all the stars in the Universe.[26] Following the 1920 Great Debate between the astronomers Harlow Shapley and Heber Doust Curtis,[27] observations by Edwin Hubble showed that the Milky Way is just one of many galaxies.

The Milky Way is a barred spiral galaxy with an estimated D25 isophotal diameter of 26.8 ± 1.1 kiloparsecs (87,400 ± 3,590 light-years),[10] but only about 1,000 light years thick at the spiral arms (more at the bulge). Recent simulations suggest that a dark matter area, also containing some visible stars, may extend up to a diameter of almost 2 million light-years (613 kpc).[28][29] The Milky Way has several satellite galaxies and is part of the Local Group of galaxies, which form part of the Virgo Supercluster, which is itself a component of the Laniakea Supercluster.[30][31]

It is estimated to contain 100–400 billion stars[32][33] and at least that number of planets.[34][35] The Solar System is located at a radius of about 27,000 light-years (8.3 kpc) from the Galactic Center,[36] on the inner edge of the Orion Arm, one of the spiral-shaped concentrations of gas and dust. The stars in the innermost 10,000 light-years form a bulge and one or more bars that radiate from the bulge. The Galactic Center is an intense radio source known as Sagittarius A*, a supermassive black hole of 4.100 (± 0.034) million solar masses.[37][38] Stars and gases at a wide range of distances from the Galactic Center orbit at approximately 220 kilometers per second. The constant rotational speed appears to contradict the laws of Keplerian dynamics and suggests that much (about 90%)[39][40] of the mass of the Milky Way is invisible to telescopes, neither emitting nor absorbing electromagnetic radiation. This conjectural mass has been termed "dark matter".[41] The rotational period is about 212 million years at the radius of the Sun.[14]

The Milky Way as a whole is moving at a velocity of approximately 600 km per second with respect to extragalactic frames of reference. The oldest stars in the Milky Way are nearly as old as the Universe itself and thus probably formed shortly after the Dark Ages of the Big Bang.[42]