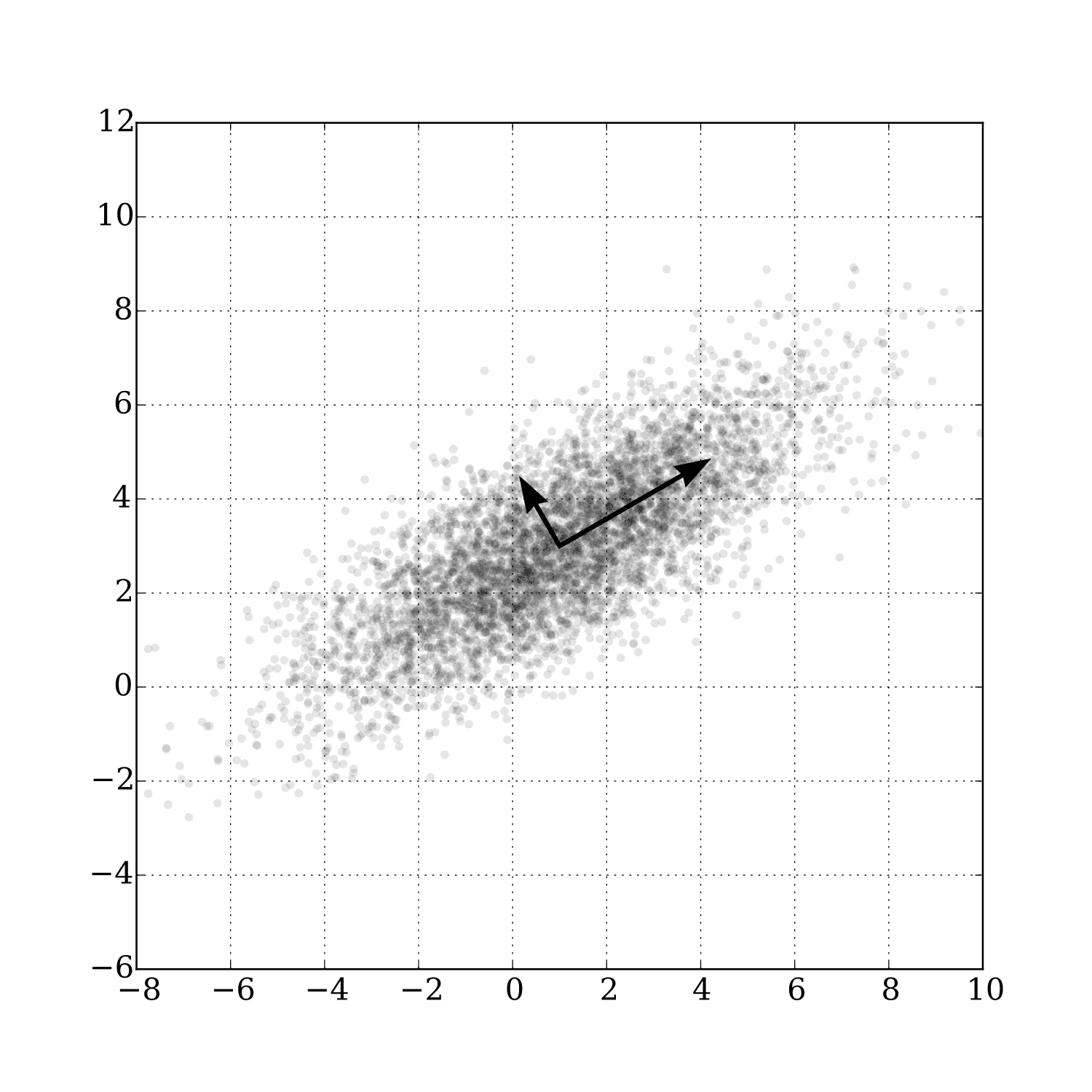 Principal component analysis (PCA) is a popular technique for analyzing large datasets containing a high number of dimensions/features per observation, increasing the interpretability of data while preserving the maximum amount of information, and enabling the visualization of multidimensional data. Formally, PCA is a statistical technique for reducing the dimensionality of a dataset. This is accomplished by linearly transforming the data into a new coordinate system where (most of) the variation in the data can be described with fewer dimensions than the initial data. Many studies use the first two principal components in order to plot the data in two dimensions and to visually identify clusters of closely related data points. Principal component analysis has applications in many fields such as population genetics, microbiome studies, and atmospheric science. [1]

unit vectors, where the

vectors. Here, a best-fitting line is defined as one that minimizes the average squared perpendicular distance from the points to the line. These directions constitute an orthonormal basis in which different individual dimensions of the data are linearly uncorrelated. Principal component analysis is the process of computing the principal components and using them to perform a change of basis on the data, sometimes using only the first few principal components and ignoring the rest.

In data analysis, the first principal component of a set of

iterations until all the variance is explained. PCA is most commonly used when many of the variables are highly correlated with each other and it is desirable to reduce their number to an independent set.

PCA is used in exploratory data analysis and for making predictive models. It is commonly used for dimensionality reduction by projecting each data point onto only the first few principal components to obtain lower-dimensional data while preserving as much of the data's variation as possible. The first principal component can equivalently be defined as a direction that maximizes the variance of the projected data. The

principal components that maximizes the variance of the projected data.

For either objective, it can be shown that the principal components are eigenvectors of the data's covariance matrix. Thus, the principal components are often computed by eigendecomposition of the data covariance matrix or singular value decomposition of the data matrix. PCA is the simplest of the true eigenvector-based multivariate analyses and is closely related to factor analysis. Factor analysis typically incorporates more domain specific assumptions about the underlying structure and solves eigenvectors of a slightly different matrix. PCA is also related to canonical correlation analysis (CCA). CCA defines coordinate systems that optimally describe the cross-covariance between two datasets while PCA defines a new orthogonal coordinate system that optimally describes variance in a single dataset.[2][3][4][5] Robust and L1-norm-based variants of standard PCA have also been proposed.[6][7][8][5]