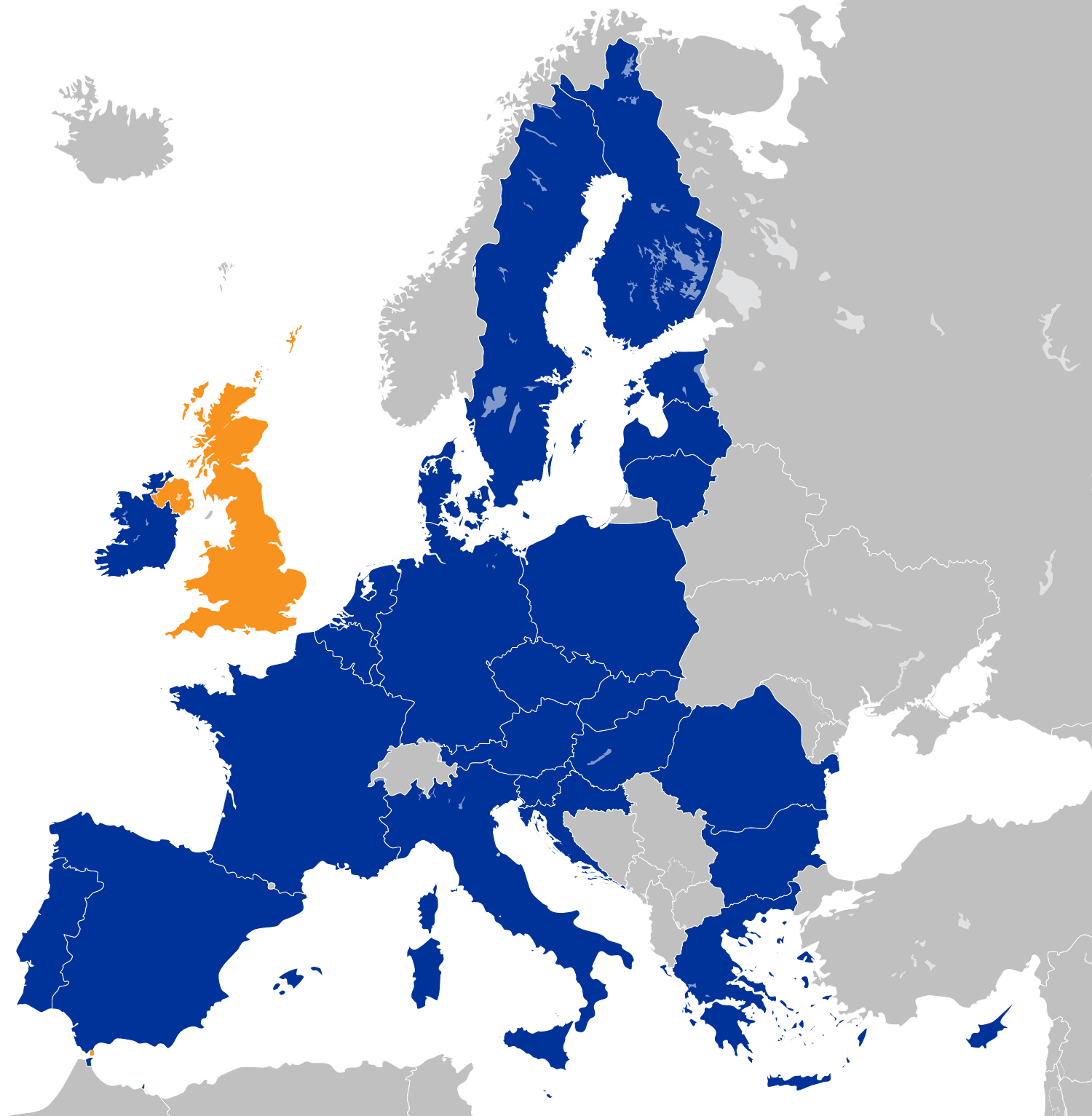 Brexit (/ˈbrɛksɪt, ˈbrɛɡzɪt/;[1] a portmanteau of "British exit") was the withdrawal of the United Kingdom (UK) from the European Union (EU) at 23:00 GMT on 31 January 2020 (00:00 1 February 2020 CET).[note 1] The UK is the only sovereign country to have left the EU or the EC.[note 2] The UK had been a member state of the EU or its predecessor the European Communities (EC), sometimes of both at the same time, since 1 January 1973. Following Brexit, EU law and the Court of Justice of the European Union no longer have primacy over British laws, except in select areas in relation to Northern Ireland.[2] The European Union (Withdrawal) Act 2018 retains relevant EU law as domestic law, which the UK can now amend or repeal. Under the terms of the Brexit withdrawal agreement, Northern Ireland continues to participate in the European Single Market in relation to goods, and to be a de facto member of the EU Customs Union.[3][4]

UK withdrawal from the European Union

The EU and its institutions have developed gradually since their establishment and during the 47 years of British membership, and grew to be of significant economic and political importance to the United Kingdom. Throughout the period of British membership, Eurosceptic groups had existed, opposing aspects of the EU and its predecessors. Labour prime minister Harold Wilson's pro-EC government held a referendum on continued EC membership in 1975, in which 67.2 per cent of those voting chose to stay within the bloc, but no further referendums were held during the subsequent process of European integration, aimed at "ever closer union", embodied in the Treaties of Maastricht, Amsterdam, Nice and Lisbon. As part of a campaign pledge to win votes from Eurosceptics,[5] Conservative prime minister David Cameron promised to hold a referendum if his government was re-elected. His government subsequently held a referendum on continued EU membership in 2016, in which voters chose to leave the EU with 51.9 per cent of the vote share. This led to his resignation, his replacement by Theresa May, and four years of negotiations with the EU on the terms of departure and on future relations, completed under a Boris Johnson government, with government control remaining with the Conservative Party in this period.

The negotiation process was both politically challenging and deeply divisive within the UK, leading to two snap elections. One deal was rejected by the British parliament, causing great uncertainty and leading to postponement of the withdrawal date to avoid a no-deal Brexit. The UK left the EU on 31 January 2020 after a withdrawal deal was passed by Parliament but continued to participate in many EU institutions (including the single market and customs union) during an eleven month transition period in order to ensure frictionless trade until all details of the post-Brexit relationship were agreed and implemented. Trade deal negotiations continued within days of the scheduled end of the transition period and the EU–UK Trade and Cooperation Agreement was signed on 30 December 2020.

The effects of Brexit will in part be determined by the cooperation agreement, which provisionally applied from 1 January 2021, and formally came into force on 1 May 2021.[6] The broad consensus among economists is that it is likely to harm the UK's economy and reduce its real per capita income in the long term.[7][8][9][10][11] It is likely to produce a large decline in immigration from countries in the European Economic Area (EEA) to the UK,[12] and creates problems for British higher education and academic research.[13]