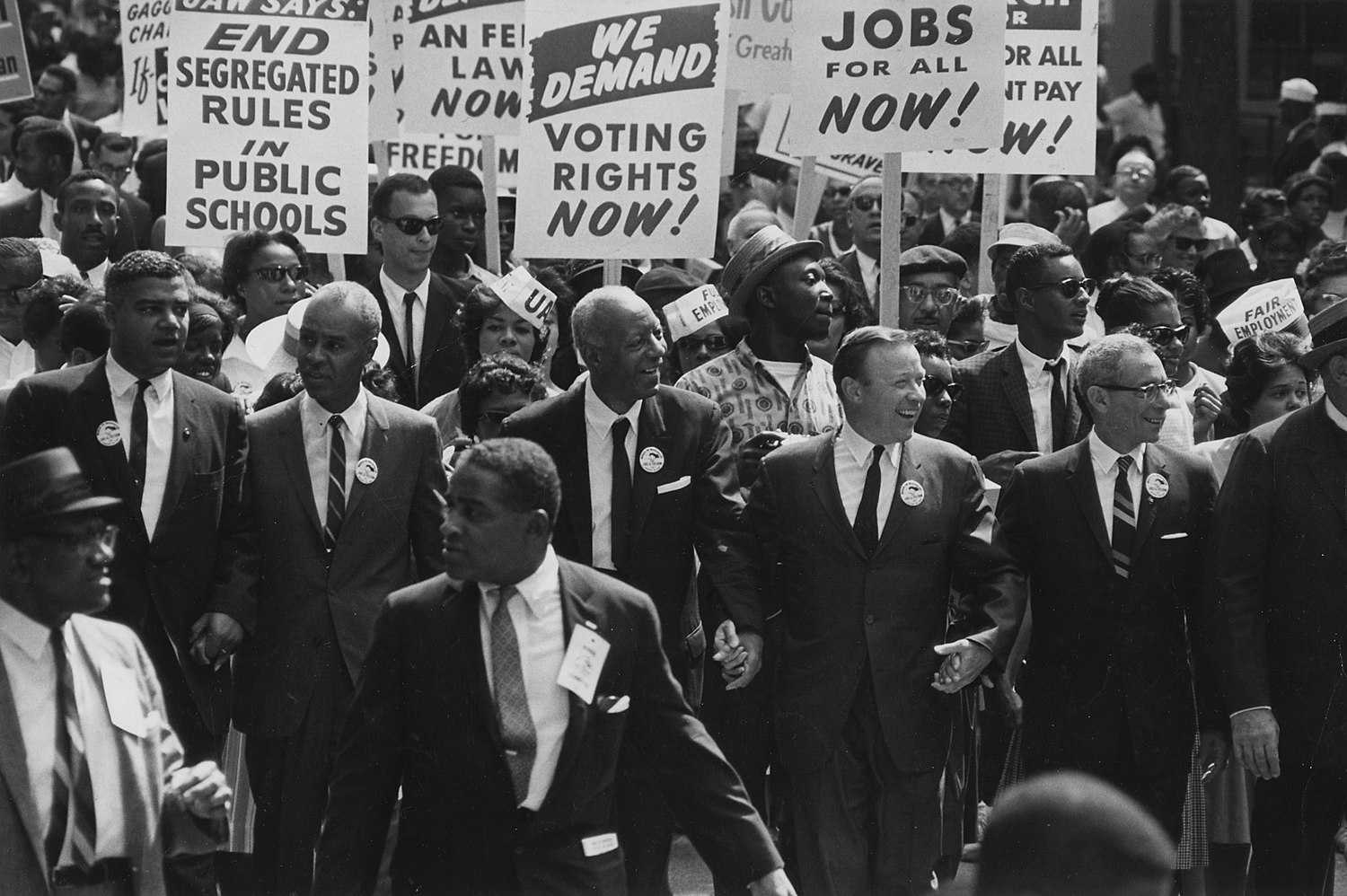 The civil rights movement[lower-alpha 2] was a nonviolent social and political movement and campaign from 1954 to 1968 in the United States to abolish legalized institutional racial segregation, discrimination, and disenfranchisement throughout the United States. The movement had its origins in the Reconstruction era during the late 19th century, although it made its largest legislative gains in the 1960s after years of direct actions and grassroots protests. The social movement's major nonviolent resistance and civil disobedience campaigns eventually secured new protections in federal law for the civil rights of all Americans.

After the American Civil War and the subsequent abolition of slavery in the 1860s, the Reconstruction Amendments to the United States Constitution granted emancipation and constitutional rights of citizenship to all African Americans, most of whom had recently been enslaved. For a short period of time, African American men voted and held political office, but as time went on they were increasingly deprived of civil rights, often under the racist Jim Crow laws, and African Americans were subjected to discrimination and sustained violence by white supremacists in the South. Over the following century, various efforts were made by African Americans to secure their legal and civil rights, such as the civil rights movement (1865–1896) and the civil rights movement (1896–1954). The movement was characterized by nonviolent mass protests and civil disobedience following highly publicized events such as the lynching of Emmett Till. These included boycotts such as the Montgomery bus boycott, "sit-ins" in Greensboro and Nashville, and marches from Selma to Montgomery.[1][2]

At the culmination of a legal strategy pursued by African Americans, in 1954 the Supreme Court struck down many of the laws that had allowed racial segregation and discrimination to be legal in the United States as unconstitutional.[3][4][5][6] The Warren Court made a series of landmark rulings against racist discrimination, including the separate but equal doctrine, such as Brown v. Board of Education (1954), Heart of Atlanta Motel, Inc. v. United States (1964), and Loving v. Virginia (1967) which banned segregation in public schools and public accommodations, and struck down all state laws banning interracial marriage.[7][8][9] The rulings played a crucial role in bringing an end to the segregationist Jim Crow laws prevalent in the Southern states.[10] In the 1960s, moderates in the movement worked with the United States Congress to achieve the passage of several significant pieces of federal legislation that authorized oversight and enforcement of civil rights laws. The Civil Rights Act of 1964[11] explicitly banned all discrimination based on race, including racial segregation in schools, businesses, and in public accommodations.[12] The Voting Rights Act of 1965 restored and protected voting rights by authorizing federal oversight of registration and elections in areas with historic under-representation of minority voters. The Fair Housing Act of 1968 banned discrimination in the sale or rental of housing.

African Americans re-entered politics in the South, and young people across the country began to take action. From 1964 through 1970, a wave of riots and protests in black communities dampened support from the white middle class, but increased support from private foundations.[13][clarification needed] The emergence of the Black Power movement, which lasted from 1965 to 1975, challenged Black leaders of the movement for its cooperative attitude and its adherence to legalism and nonviolence. Its leaders demanded not only legal equality, but also economic self-sufficiency for the community. Support for the Black Power movement came from African Americans who had seen little material improvement since the civil rights movement's peak in the mid-1960s, and still faced discrimination in jobs, housing, education and politics. Martin Luther King Jr. is often cited as the most visible leader of the movement. However, some scholars note that the movement was too diverse to be credited to any particular person, organization, or strategy.[14]