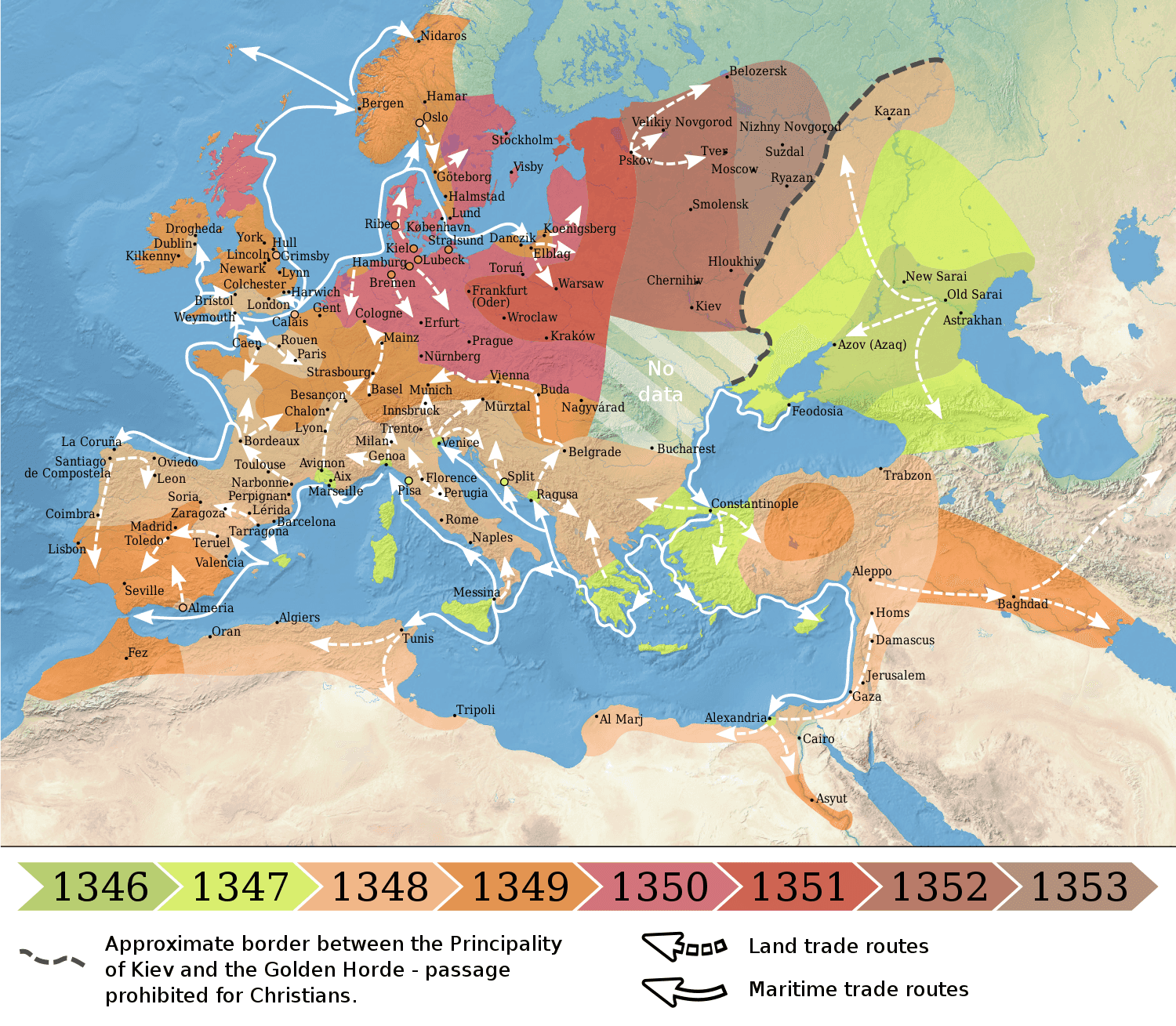 The Black Death (also known as the Pestilence, the Great Mortality or the Plague)[lower-alpha 1] was a bubonic plague pandemic occurring in Western Eurasia and North Africa from 1346 to 1353. It is the most fatal pandemic recorded in human history, causing the deaths of 75–200 million people,[1] peaking in Europe from 1347 to 1351.[2][3] Bubonic plague is caused by the bacterium Yersinia pestis spread by fleas, but it can also take a secondary form where it is spread by person-to-person contact via aerosols causing septicaemic or pneumonic plagues.[4][5]

The Black Death was the beginning of the second plague pandemic.[6] The plague created religious, social and economic upheavals, with profound effects on the course of European history.

The origin of the Black Death is disputed.[by whom?] The pandemic originated either in Central Asia or East Asia before spreading to Crimea with the Golden Horde army of Jani Beg as he was besieging the Genoese trading port of Kaffa in Crimea (1347).[7] From Crimea, it was most likely carried by fleas living on the black rats that travelled on Genoese ships, spreading through the Mediterranean Basin and reaching North Africa, Western Asia, and the rest of Europe via Constantinople, Sicily, and the Italian Peninsula.[8] There is evidence that once it came ashore, the Black Death mainly spread person-to-person as pneumonic plague, thus explaining the quick inland spread of the epidemic, which was faster than would be expected if the primary vector was rat fleas causing bubonic plague.[9] In 2022, it was discovered that there was a sudden surge of deaths in what is today Kyrgyzstan from the Black Death in the late 1330s; when combined with genetic evidence, this implies that the initial spread may not have been due to Mongol conquests in the 14th century, as previously speculated.[10][11]

The Black Death was the second great natural disaster to strike Europe during the Late Middle Ages (the first one being the Great Famine of 1315–1317) and is estimated to have killed 30 percent to 60 percent of the European population, as well as about one-third of the population of the Middle East.[12][13][14] The plague might have reduced the world population from c. 475 million to 350–375 million in the 14th century.[15] There were further outbreaks throughout the Late Middle Ages and, with other contributing factors (the Crisis of the Late Middle Ages), the European population did not regain its level in 1300 until 1500.[lower-alpha 2][16] Outbreaks of the plague recurred around the world until the early 19th century.