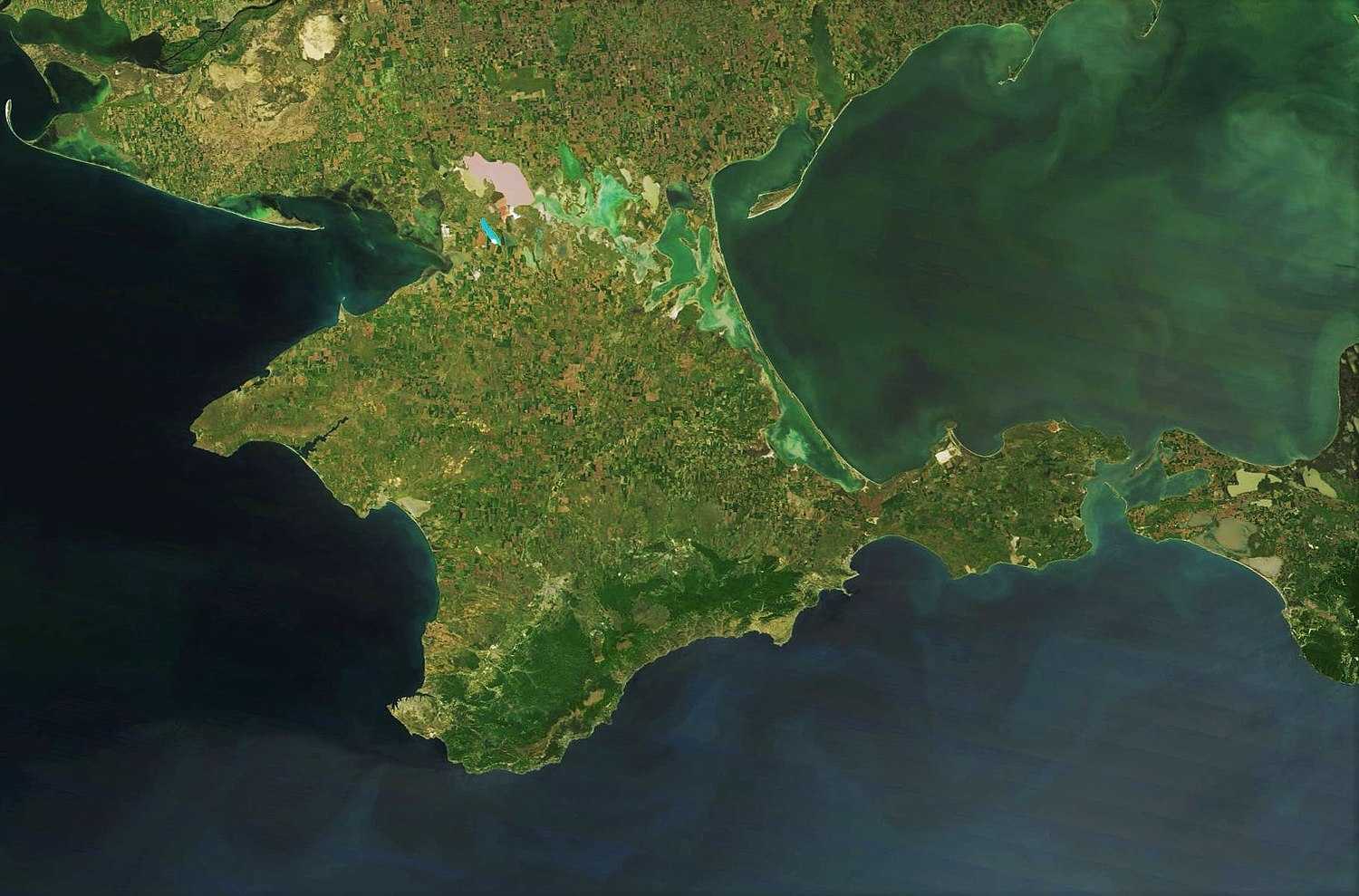 listen) kry-MEE-ə) is a peninsula in Ukraine, on the northern coast of the Black Sea, that has been occupied by Russia since 2014. It has a population of 2.4 million.[1] The peninsula is almost entirely surrounded by the Black Sea and the smaller Sea of Azov. The Isthmus of Perekop connects the peninsula to Kherson Oblast in mainland Ukraine. To the east, the Crimean Bridge, constructed in 2018, spans the Strait of Kerch, linking the peninsula with Krasnodar Krai in Russia. The Arabat Spit, located to the northeast, is a narrow strip of land that separates the Sivash lagoons from the Sea of Azov. Across the Black Sea to the west lies Romania and to the south is Turkey.

Ukrainian territory occupied by Russia since 2014

Crimea (called the Tauric Peninsula until the early modern period) has historically been at the boundary between the classical world and the steppe. Greeks colonized its southern fringe and were absorbed by the Roman and Byzantine Empires and successor states while remaining culturally Greek. Some cities became trading colonies of Genoa, until conquered by the Ottoman Empire. Throughout this time the interior was occupied by a changing cast of steppe nomads. In the 14th century it became part of the Golden Horde; the Crimean Khanate emerged as a successor state. In the 15th century, the Khanate became a dependency of the Ottoman Empire. Russia was often the target of slave raids during this period. In 1783, the Russian Empire annexed Crimea after an earlier war with Turkey. Crimea's strategic position led to the 1854 Crimean War and many short lived regimes following the 1917 Russian Revolution. When the Bolsheviks secured Crimea it became an autonomous soviet republic within Russia. During World War II, Crimea was downgraded to an oblast. In 1944 Crimean Tatars were ethnically cleansed and deported under the orders of Joseph Stalin, in what has been described as a cultural genocide. The USSR transferred Crimea to Ukraine on the 300th anniversary of the Pereyaslav Treaty in 1954.

After Ukrainian independence in 1991 the central government and Crimea clashed, with the region being granted more autonomy. The Soviet fleet in Crimea was also in contention but a 1997 treaty allowed Russia to continue basing its fleet in Sevastopol. In 2014, the Russians occupied the peninsula and organized an illegal referendum in support of Russian annexation, but most countries recognize Crimea as Ukrainian territory.