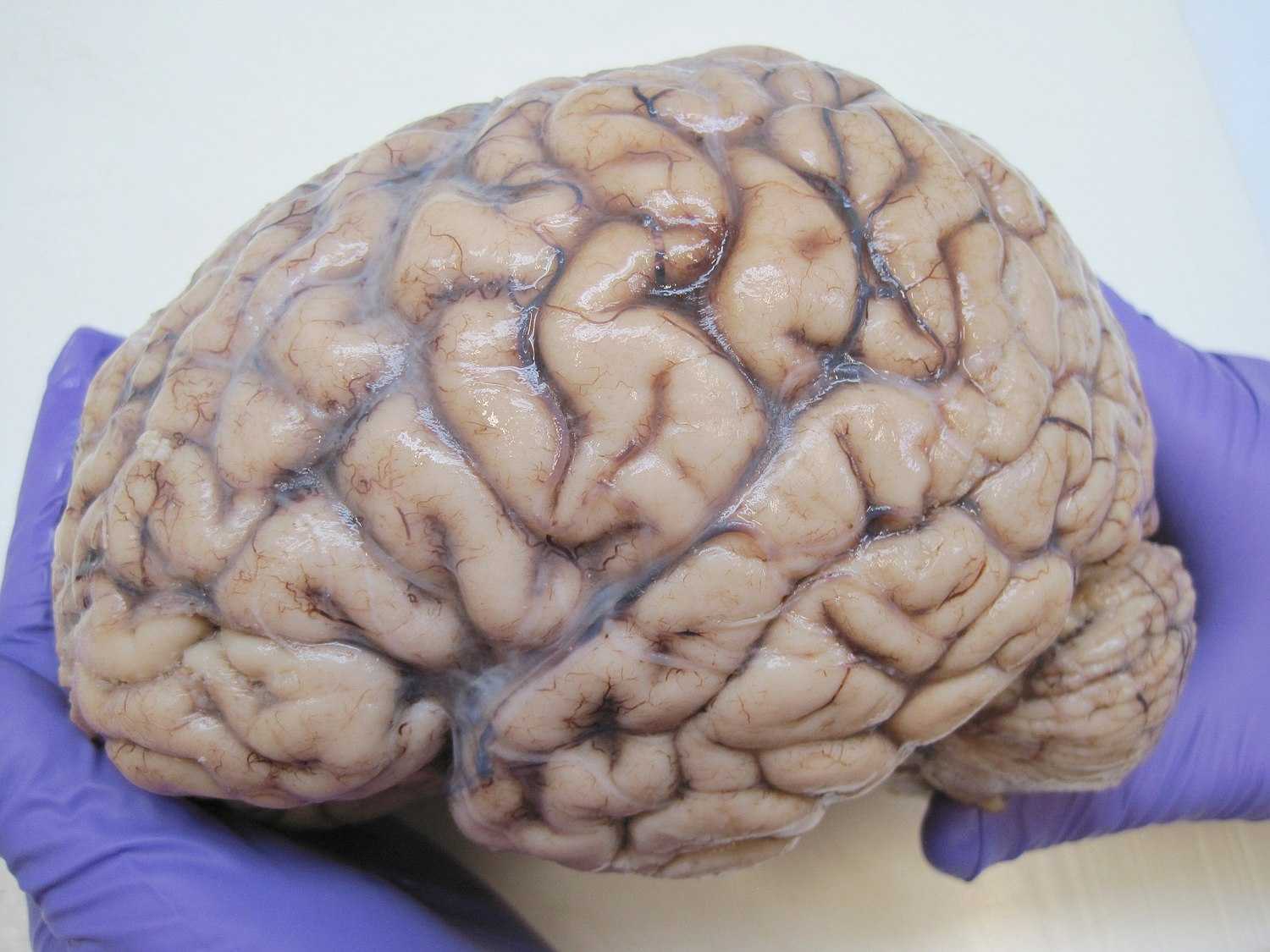 The human brain is the central organ of the human nervous system, and with the spinal cord makes up the central nervous system. The brain consists of the cerebrum, the brainstem and the cerebellum. It controls most of the activities of the body, processing, integrating, and coordinating the information it receives from the sense organs, and making decisions as to the instructions sent to the rest of the body. The brain is contained in, and protected by, the skull bones of the head.

The cerebrum, the largest part of the human brain, consists of two cerebral hemispheres. Each hemisphere has an inner core composed of white matter, and an outer surface – the cerebral cortex – composed of grey matter. The cortex has an outer layer, the neocortex, and an inner allocortex. The neocortex is made up of six neuronal layers, while the allocortex has three or four. Each hemisphere is conventionally divided into four lobes – the frontal, temporal, parietal, and occipital lobes. The frontal lobe is associated with executive functions including self-control, planning, reasoning, and abstract thought, while the occipital lobe is dedicated to vision. Within each lobe, cortical areas are associated with specific functions, such as the sensory, motor and association regions. Although the left and right hemispheres are broadly similar in shape and function, some functions are associated with one side, such as language in the left and visual-spatial ability in the right. The hemispheres are connected by commissural nerve tracts, the largest being the corpus callosum.

The cerebrum is connected by the brainstem to the spinal cord. The brainstem consists of the midbrain, the pons, and the medulla oblongata. The cerebellum is connected to the brainstem by three pairs of nerve tracts called cerebellar peduncles. Within the cerebrum is the ventricular system, consisting of four interconnected ventricles in which cerebrospinal fluid is produced and circulated. Underneath the cerebral cortex are several important structures, including the thalamus, the epithalamus, the pineal gland, the hypothalamus, the pituitary gland, and the subthalamus; the limbic structures, including the amygdala and the hippocampus; the claustrum, the various nuclei of the basal ganglia; the basal forebrain structures, and the three circumventricular organs. The cells of the brain include neurons and supportive glial cells. There are more than 86 billion neurons in the brain, and a more or less equal number of other cells. Brain activity is made possible by the interconnections of neurons and their release of neurotransmitters in response to nerve impulses. Neurons connect to form neural pathways, neural circuits, and elaborate network systems. The whole circuitry is driven by the process of neurotransmission.

The brain is protected by the skull, suspended in cerebrospinal fluid, and isolated from the bloodstream by the blood–brain barrier. However, the brain is still susceptible to damage, disease, and infection. Damage can be caused by trauma, or a loss of blood supply known as a stroke. The brain is susceptible to degenerative disorders, such as Parkinson's disease, dementias including Alzheimer's disease, and multiple sclerosis. Psychiatric conditions, including schizophrenia and clinical depression, are thought to be associated with brain dysfunctions. The brain can also be the site of tumours, both benign and malignant; these mostly originate from other sites in the body.

The study of the anatomy of the brain is neuroanatomy, while the study of its function is neuroscience. Numerous techniques are used to study the brain. Specimens from other animals, which may be examined microscopically, have traditionally provided much information. Medical imaging technologies such as functional neuroimaging, and electroencephalography (EEG) recordings are important in studying the brain. The medical history of people with brain injury has provided insight into the function of each part of the brain. Neuroscience research has expanded considerably, and research is ongoing.

In culture, the philosophy of mind has for centuries attempted to address the question of the nature of consciousness and the mind–body problem. The pseudoscience of phrenology attempted to localise personality attributes to regions of the cortex in the 19th century. In science fiction, brain transplants are imagined in tales such as the 1942 Donovan's Brain.