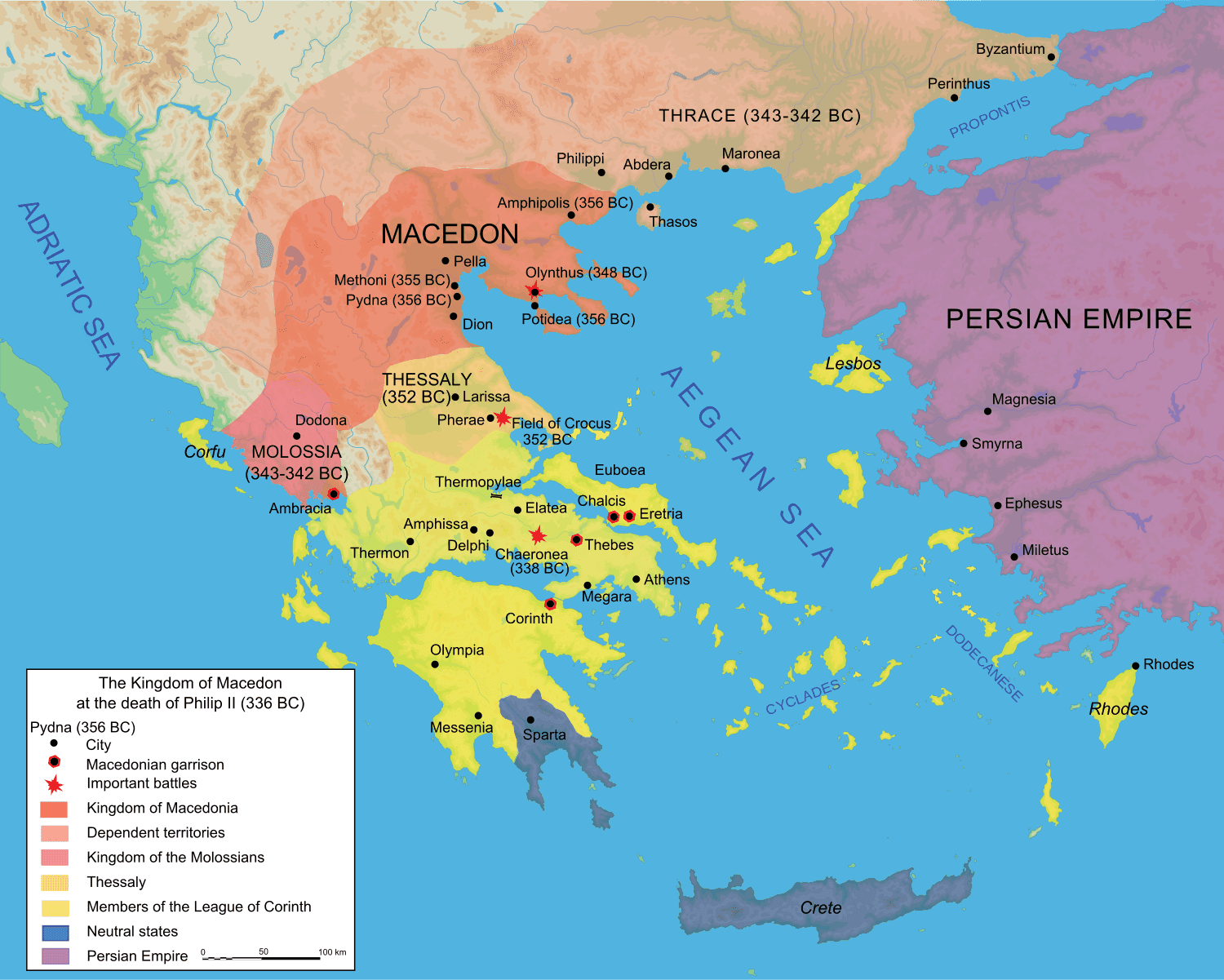 The kingdom of Macedonia was an ancient state in what is now the Macedonian region of northern Greece, founded in the mid-7th century BC during the period of Archaic Greece and lasting until the mid-2nd century BC. Led first by the Argead dynasty of kings, Macedonia became a vassal state of the Achaemenid Empire of ancient Persia during the reigns of Amyntas I of Macedon (r. 547 – 498 BC) and his son Alexander I of Macedon (r. 498 – 454 BC). The period of Achaemenid Macedonia came to an end in roughly 479 BC with the ultimate Greek victory against the second Persian invasion of Greece led by Xerxes I and the withdrawal of Persian forces from the European mainland.

During the age of Classical Greece, Perdiccas II of Macedon (r. 454 – 413 BC) became directly involved in the Peloponnesian War (431–404 BC) between Classical Athens and Sparta, shifting his alliance from one city-state to another while attempting to retain Macedonian control over the Chalcidice peninsula. His reign was also marked by conflict and temporary alliances with the Thracian ruler Sitalces of the Odrysian Kingdom. He eventually made peace with Athens, thus forming an alliance between the two that carried over into the reign of Archelaus I of Macedon (r. 413 – 399 BC). His reign brought peace, stability, and financial security to the Macedonian realm, yet his little-understood assassination (perhaps by a royal page) left the kingdom in peril and conflict. The turbulent reign of Amyntas III of Macedon (r. 393 – 370 BC) witnessed devastating invasions by both the Illyrian ruler Bardylis of the Dardani and the Chalcidian city-state of Olynthos, both of which were defeated with the aid of foreign powers, the city-states of Thessaly and Sparta, respectively. Alexander II (r. 370 – 368 BC) invaded Thessaly but failed to hold Larissa, which was captured by Pelopidas of Thebes, who made peace with Macedonia on condition that they surrender noble hostages, including the future king Philip II of Macedon (r. 359 – 336 BC).

Philip II came to power when his older brother Perdiccas III of Macedon (r. 368 – 359 BC) was defeated and killed in battle by the forces of Bardylis. With the use of skillful diplomacy, Philip II was able to make peace with the Illyrians, Thracians, Paeonians, and Athenians who threatened his borders. This allowed him time to dramatically reform the Ancient Macedonian army, establishing the Macedonian phalanx that would prove crucial to his kingdom's success in subduing Greece, with the exception of Sparta. He gradually enhanced his political power by forming marriage alliances with foreign powers, destroying the Chalcidian League in the Olynthian War (349–348 BC), and becoming an elected member of the Thessalian and Amphictyonic Leagues for his role in defeating Phocis in the Third Sacred War (356–346 BC). After the Macedonian victory over a coalition led by Athens and Thebes at the 338 BC Battle of Chaeronea, Philip established the League of Corinth and was elected as its hegemon in anticipation of commanding a united Greek invasion of the Achaemenid Empire under Macedonian hegemony.[1][2][3] However, when Philip II was assassinated by one of his bodyguards, he was succeeded by his son Alexander III, better known as Alexander the Great (r. 336 – 323 BC), who invaded Achaemenid Egypt and Asia and toppled the rule of Darius III, who was forced to flee into Bactria (in what is now Afghanistan) where he was killed by one of his kinsmen, Bessus. This pretender to the throne was eventually executed by Alexander, yet the latter eventually succumbed to an unknown illness at the age of 32, whose death led to the Partition of Babylon by his former generals, the diadochi, chief among them being Antipater, regent of Alexander IV of Macedon (r. 323 – 309 BC). This event ushered in the Hellenistic period in West Asia and the Mediterranean world, leading to the formation of the Ptolemaic, Seleucid, and Attalid successor kingdoms in the former territories of Alexander's empire.

Macedonia continued its role as the dominant state of Hellenistic Greece, yet its authority became diminished due to civil wars between the Antipatrid and nascent Antigonid dynasty. After surviving crippling invasions by Pyrrhus of Epirus, Lysimachus, Seleucus I Nicator, and the Celtic Galatians, Macedonia under the leadership of Antigonus II of Macedon (r. 277 – 274 BC; 272–239 BC) was able to subdue Athens and defend against the naval onslaught of Ptolemaic Egypt in the Chremonidean War (267–261 BC). However, the rebellion of Aratus of Sicyon in 351 BC led to the formation of the Achaean League, which proved to be a perennial problem for the ambitions of the Macedonian kings in mainland Greece. Macedonian power saw a resurgence under Antigonus III Doson (r. 229 – 221 BC), who defeated the Spartans under Cleomenes III in the Cleomenean War (229–222 BC). Although Philip V of Macedon (r. 221 – 179 BC) managed to defeat the Aetolian League in the Social War (220–217 BC), his attempts to project Macedonian power into the Adriatic Sea and formation of a Macedonian–Carthaginian Treaty with Hannibal alarmed the Roman Republic, which convinced a coalition of Greek city-states to attack Macedonia while Rome focused on defeating Hannibal in Italy. Rome was ultimately victorious in the First (214–205 BC) and Second Macedonian War (200–197 BC) against Philip V, who was also defeated in the Cretan War (205–200 BC) by a coalition led by Rhodes. Macedonia was forced to relinquish its holdings in Greece outside of Macedonia proper, while the Third Macedonian War (171–168 BC) succeeded in toppling the monarchy altogether, after which Rome placed Perseus of Macedon (r. 179 – 168 BC) under house arrest and established four client state republics in Macedonia. In an attempt to dissuade rebellion in Macedonia, Rome imposed stringent constitutions in these states that limited their economic growth and interactivity. However, Andriscus, a pretender to the throne claiming descent from the Antigonids, briefly revived the Macedonian monarchy during the Fourth Macedonian War (150–148 BC). His forces were crushed at the second Battle of Pydna by the Roman general Quintus Caecilius Metellus Macedonicus, leading to the establishment of the Roman province of Macedonia and the initial period of Roman Greece.