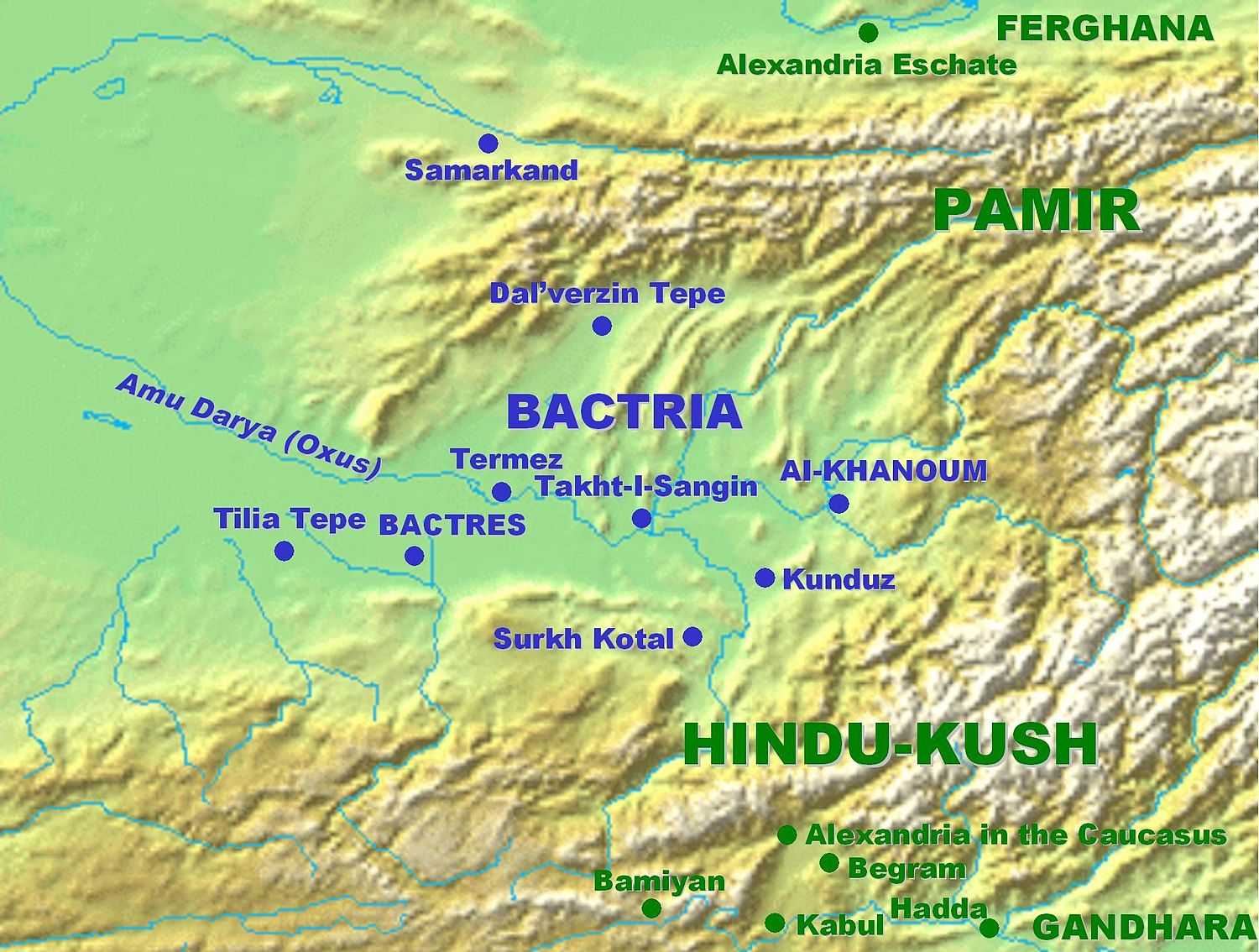 Bactria (/ˈbæktriə/; Bactrian: βαχλο, Bakhlo), or Bactriana, was an ancient region in Central Asia in Amu Darya's middle stream, stretching north of the Hindu Kush, west of the Pamirs and south of the Gissar range, covering the northern part of Afghanistan, southwestern Tajikistan and southeastern Uzbekistan.[1]

Called "beautiful Bactria, crowned with flags" by the Avesta, the region is considered in Zoroastrianism to be one of the sixteen perfect Iranian lands that the supreme deity Ahura Mazda had created. One of the early centres of Zoroastrianism and capital of the legendary Kayanian kings of Iran, Bactria is mentioned in the Behistun Inscription of Darius the Great as one of the satrapies of the Achaemenid Empire; it was a special satrapy and was ruled by a crown prince or an intended heir. Bactria was the centre of Iranian resistance against the Macedonian invaders after the fall of the Achaemenid Empire in the 4th century BC, but eventually fell to Alexander the Great. After the death of Alexander, Bactria was annexed by his general, Seleucus I.

Nevertheless, the Seleucids lost the region after the declaration of independence by the satrap of Bactria, Diodotus I; thus began the history of the Greco-Bactrian and the later Indo-Greek Kingdoms. By the 2nd century BC, Bactria was conquered by the Parthian Empire, and in the early 1st century, the Kushan Empire was formed by the Yuezhi in the Bactrian territories. Shapur I, the second Sasanian King of Kings of Iran, conquered western parts of the Kushan Empire in the 3rd century, and the Kushano-Sasanian Kingdom was formed. The Sasanians lost Bactria in the 4th century; however, it was reconquered in the 6th century. With the Muslim conquest of Iran in the 7th century, Islamization of Bactria began.

Bactria was centre of an Iranian Renaissance in the 8th and 9th centuries[citation needed], and New Persian as an independent literary language first emerged in this region. The Samanid Empire was formed in Eastern Iran by the descendants of Saman Khuda, a Persian from Bactria; thus started spread of Persian language in the region and decline of Bactrian language. Bactrian, an Eastern Iranian language, was the common language of Bactria and surroundings areas in ancient and early medieval times.