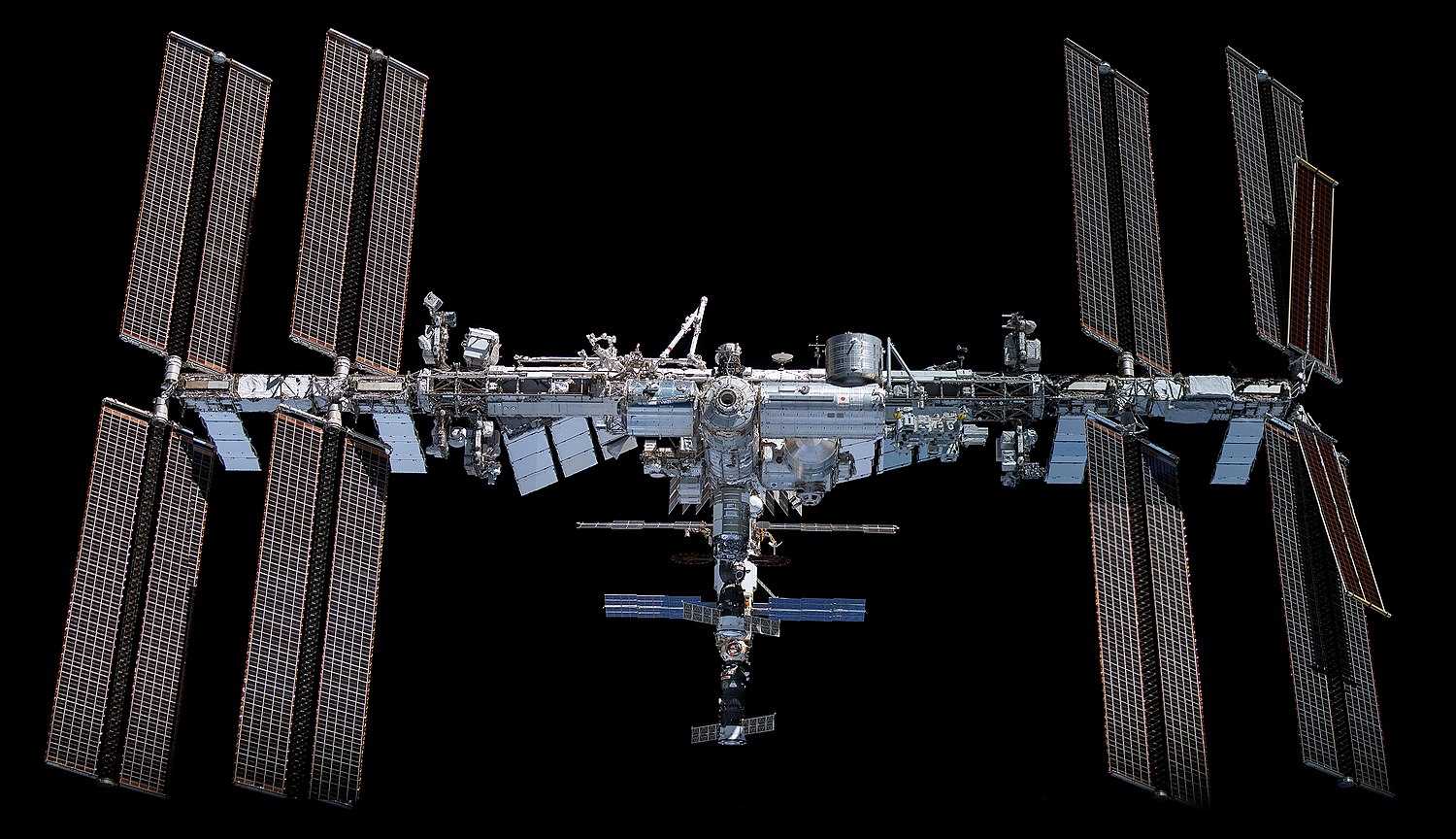 The International Space Station (ISS) is the largest modular space station in low Earth orbit. The project involves five space agencies: those include the United States' NASA, Russia's Roscosmos, Japan's JAXA, Europe's ESA, and Canada's CSA.[8][9] The ownership and use of the space station is established by intergovernmental treaties and agreements.[10] The station serves as a microgravity and space environment research laboratory in which scientific research is conducted in astrobiology, astronomy, meteorology, physics, and other fields.[11][12] The ISS is suited for testing the spacecraft systems and equipment required for possible future long-duration missions to the Moon and Mars.[13]

The ISS programme evolved from the Space Station Freedom, a 1984 American proposal to construct a permanently crewed Earth-orbiting station,[14] and the contemporaneous Soviet/Russian Mir-2 proposal from 1976 with similar aims. The ISS is the ninth space station to be inhabited by crews, following the Soviet and later Russian Salyut, Almaz, and Mir stations and the American Skylab. It is the largest artificial object in the solar system and the largest satellite in low Earth orbit, regularly visible to the naked eye from Earth's surface.[15][16] It maintains an orbit with an average altitude of 400 kilometres (250 mi) by means of reboost manoeuvres using the engines of the Zvezda Service Module or visiting spacecraft.[17] The ISS circles the Earth in roughly 93 minutes, completing 15.5 orbits per day.[18]

The station is divided into two sections: the Russian Orbital Segment (ROS) is operated by Russia, while the United States Orbital Segment (USOS) is run by the United States as well as by the other states. The Russian segment includes six modules. The US segment includes ten modules, whose support services are distributed 76.6% for NASA, 12.8% for JAXA, 8.3% for ESA and 2.3% for CSA.

Roscosmos had previously[19][20] endorsed the continued operation of ROS through 2024,[21] having proposed using elements of the segment to construct a new Russian space station called OPSEK.[22] However, continued cooperation has been rendered uncertain by the 2022 Russian invasion of Ukraine and subsequent international sanctions on Russia, who theoretically, may lower, redirect, or cut funding from their side of the space station due to the sanctions set on them.[19][20]

The first ISS component was launched in 1998, and the first long-term residents arrived on 2 November 2000 after being launched from the Baikonur Cosmodrome on 31 October 2000.[23] The station has since been continuously occupied for 22 years and 98 days,[24] the longest continuous human presence in low Earth orbit, having surpassed the previous record of 9 years and 357 days held by the Mir space station. The latest major pressurised module, Nauka, was fitted in 2021, a little over ten years after the previous major addition, Leonardo in 2011. Development and assembly of the station continues, with an experimental inflatable space habitat added in 2016, and several major new Russian elements scheduled for launch starting in 2021. In January 2022, the station's operation authorization was extended to 2030, with funding secured within the United States through that year.[25][26] There have been calls to privatize ISS operations after that point to pursue future Moon and Mars missions, with former NASA Administrator Jim Bridenstine stating: "given our current budget constraints, if we want to go to the moon and we want to go to Mars, we need to commercialize low Earth orbit and go on to the next step."[27]

The ISS consists of pressurised habitation modules, structural trusses, photovoltaic solar arrays, thermal radiators, docking ports, experiment bays and robotic arms. Major ISS modules have been launched by Russian Proton and Soyuz rockets and US Space Shuttles.[28] The station is serviced by a variety of visiting spacecraft: the Russian Soyuz and Progress, the SpaceX Dragon 2, and the Northrop Grumman Space Systems Cygnus,[29] and formerly the European Automated Transfer Vehicle (ATV), the Japanese H-II Transfer Vehicle,[8] and SpaceX Dragon 1. The Dragon spacecraft allows the return of pressurised cargo to Earth, which is used, for example, to repatriate scientific experiments for further analysis. As of April 2022[update], 251 astronauts, cosmonauts, and space tourists from 20 different nations have visited the space station, many of them multiple times.