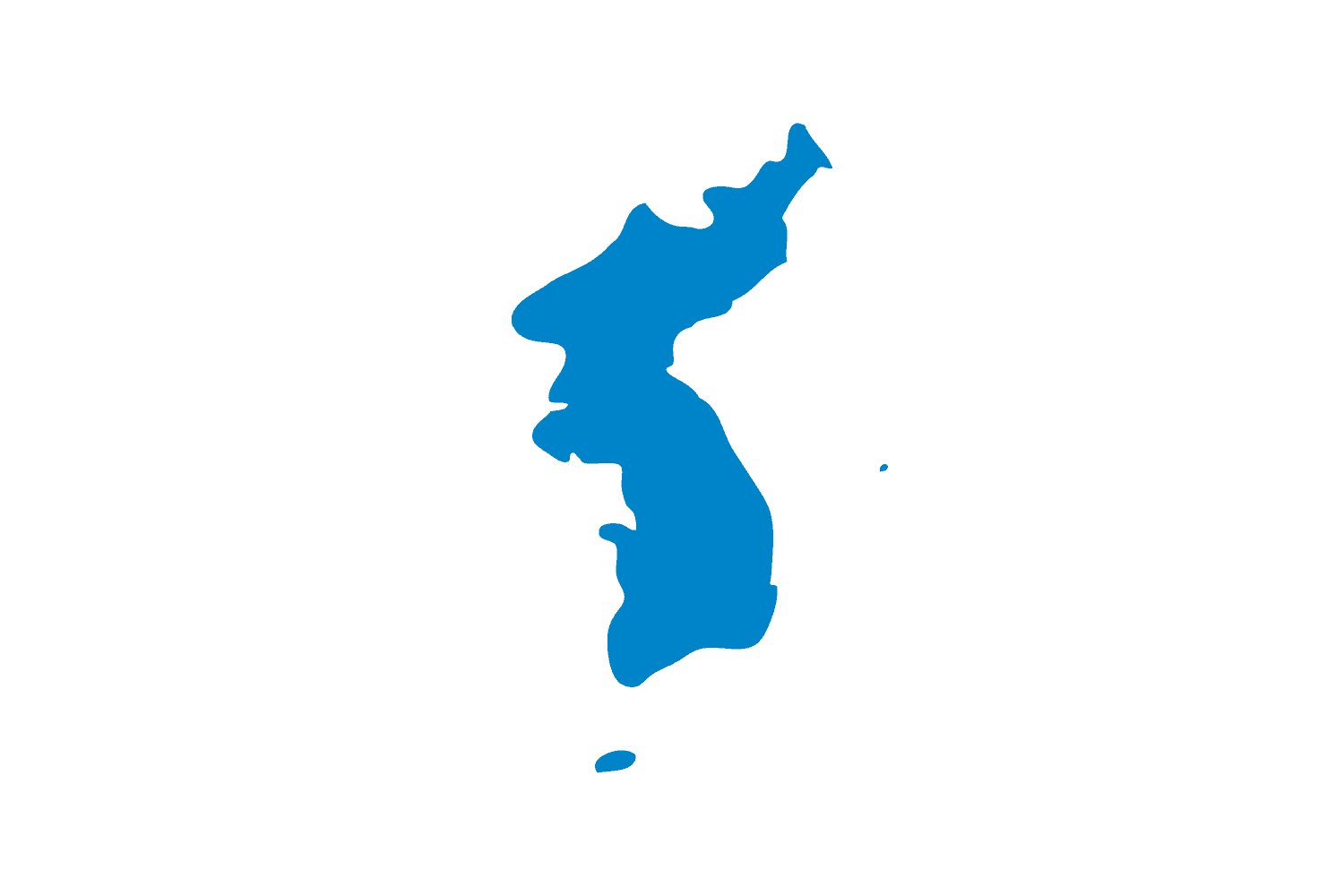 Korea (Korean: 한국, Hanguk or 조선, Joseon) is a peninsular region in East Asia. Since 1945, it has been divided at or near the 38th parallel, with North Korea (Democratic People's Republic of Korea) comprising its northern half and South Korea (Republic of Korea) comprising its southern half. Korea consists of the Korean Peninsula, Jeju Island, and several minor islands near the peninsula. The peninsula is bordered by China to the northwest and Russia to the northeast. It is separated from Japan to the east by the Korea Strait and the Sea of Japan (East Sea).

During the first half of the 1st millennium, Korea was divided between three states, Goguryeo, Baekje, and Silla, together known as the Three Kingdoms of Korea. In the second half of the 1st millennium, Silla defeated and conquered Baekje and Goguryeo, leading to the "Unified Silla" period. Meanwhile, Balhae formed in the north, superseding former Goguryeo. Unified Silla eventually collapsed into three separate states due to civil war, ushering in the Later Three Kingdoms. Toward the end of the 1st millennium, Goguryeo was resurrected as Goryeo, which defeated the two other states and unified the Korean Peninsula as a single sovereign state. Around the same time, Balhae collapsed and its last crown prince fled south to Goryeo. Goryeo (also spelled as Koryŏ), whose name developed into the modern exonym "Korea", was a highly cultured state that created the world's first metal movable type in 1234.[3][4][5][6][7][8] However, multiple incursions by the Mongol Empire during the 13th century greatly weakened the nation, which eventually agreed to become a vassal state after decades of fighting. Following military resistance under King Gongmin that ended Mongol political influence in Goryeo, severe political strife followed, and Goryeo eventually fell to a coup led by General Yi Seong-gye, who established Joseon on 17 July 1392.

The first 200 years of the Joseon era were marked by relative peace. During this period, the Korean alphabet was created by Sejong the Great in the 15th century and there was increasing influence of Confucianism. During the later part of the dynasty, Korea's isolationist policy earned it the Western nickname of the "hermit kingdom". Korea was removed from Chinese suzerainty following the Qing dynasty's defeat in the First Sino-Japanese War, and Gojong of Korea subsequently proclaimed the Korean Empire in 1897. The unexpected victory of Japan in the Russo-Japanese War spelled the end of Russian imperial ambitions in Korea, and Japan was left with no other rivals in the region. The Korean Empire subsequently became a protectorate of Japan on 17 November 1905, and was later annexed by Japan on 22 August 1910.

Japan relinquished control over Korea after formally surrendering to the Allies on 2 September 1945, in the aftermath of World War II. The Soviet Union and the United States had agreed to partition Korea along the 38th parallel, with the Soviets occupying the north and the Americans occupying the south. These circumstances became the basis for the division of Korea by the two superpowers with two different ideologies, exacerbated by their inability to agree on the terms of Korean independence. The Communist-inspired government in the North received backing from the Soviet Union in opposition to the pro-Western government in the South, leading to Korea's division into two sovereign states in 1948: North Korea, and South Korea. Tensions between the two resulted in the outbreak of the Korean War in 1950. With involvement by foreign troops, the war ended in a stalemate in 1953, but without a formalised peace treaty. This status contributes to the high tensions that continue to divide the peninsula, and both states continue to claim to be the sole legitimate one of the region. A breakthrough in the peace process came on 27 April 2018, when North Korea and South Korea signed the Panmunjom Declaration on ending the conflict and reunifying Korea.