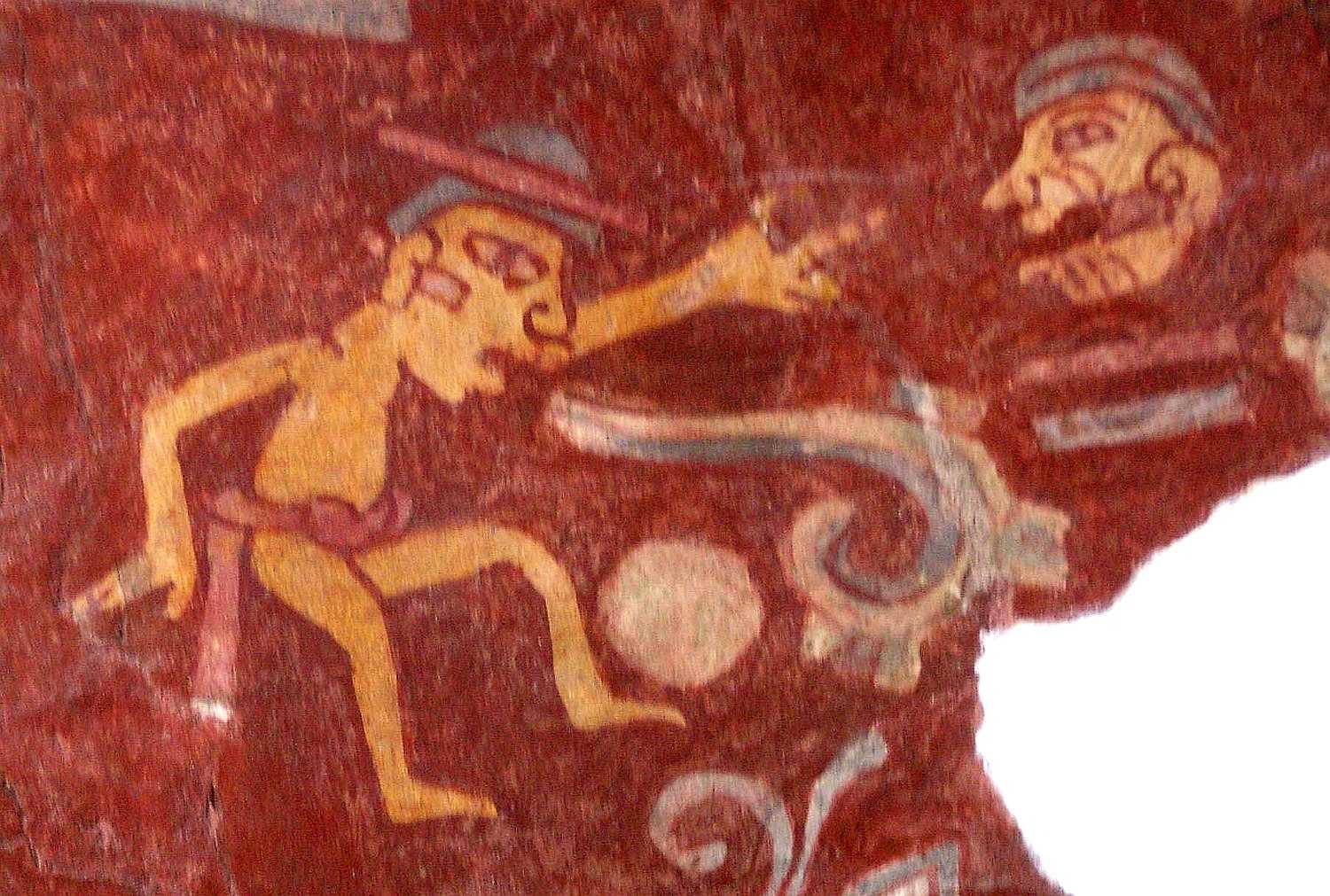 Language is a structured system of communication that consists of grammar and vocabulary. It is the primary means by which humans convey meaning, both in spoken and written forms, and may also be conveyed through sign languages. The vast majority of human languages have developed writing systems that allow for the recording and preservation of the sounds or signs of language. Human language is characterized by its cultural and historical diversity, with significant variations observed between cultures and across time.[1] Human languages possess the properties of productivity and displacement, which enable the creation of an infinite number of sentences, and the ability to refer to objects, events, and ideas that are not immediately present in the discourse. The use of human language relies on social convention and is acquired through learning.

A mural in Teotihuacan, Mexico (c. 2nd century) depicting a person emitting a speech scroll from his mouth, symbolizing speech Cuneiform is the first known form of written language, but spoken language predates writing by at least many tens of thousands of years. Estimates of the number of human languages in the world vary between 5,000 and 7,000. Precise estimates depend on an arbitrary distinction (dichotomy) established between languages and dialects.[2] Natural languages are spoken, signed, or both; however, any language can be encoded into secondary media using auditory, visual, or tactile stimuli – for example, writing, whistling, signing, or braille. In other words, human language is modality-independent, but written or signed language is the way to inscribe or encode the natural human speech or gestures.

Depending on philosophical perspectives regarding the definition of language and meaning, when used as a general concept, "language" may refer to the cognitive ability to learn and use systems of complex communication, or to describe the set of rules that makes up these systems, or the set of utterances that can be produced from those rules. All languages rely on the process of semiosis to relate signs to particular meanings. Oral, manual and tactile languages contain a phonological system that governs how symbols are used to form sequences known as words or morphemes, and a syntactic system that governs how words and morphemes are combined to form phrases and utterances.

The scientific study of language is called linguistics. Critical examinations of languages, such as philosophy of language, the relationships between language and thought, how words represent experience, etc., have been debated at least since Gorgias and Plato in ancient Greek civilization. Thinkers such as Jean-Jacques Rousseau (1712–1778) have argued that language originated from emotions, while others like Immanuel Kant (1724–1804) have argued that languages originated from rational and logical thought. Twentieth century philosophers such as Ludwig Wittgenstein (1889–1951) argued that philosophy is really the study of language itself. Major figures in contemporary linguistics of these times include Ferdinand de Saussure and Noam Chomsky.

Language is thought to have gradually diverged from earlier primate communication systems when early hominins acquired the ability to form a theory of mind and shared intentionality.[3][4] This development is sometimes thought to have coincided with an increase in brain volume, and many linguists see the structures of language as having evolved to serve specific communicative and social functions. Language is processed in many different locations in the human brain, but especially in Broca's and Wernicke's areas. Humans acquire language through social interaction in early childhood, and children generally speak fluently by approximately three years old. Language and culture are codependent. Therefore, in addition to its strictly communicative uses, language has social uses such as signifying group identity, social stratification, as well as use for social grooming and entertainment.

Languages evolve and diversify over time, and the history of their evolution can be reconstructed by comparing modern languages to determine which traits their ancestral languages must have had in order for the later developmental stages to occur. A group of languages that descend from a common ancestor is known as a language family; in contrast, a language that has been demonstrated to not have any living or non-living relationship with another language is called a language isolate. There are also many unclassified languages whose relationships have not been established, and spurious languages may have not existed at all. Academic consensus holds that between 50% and 90% of languages spoken at the beginning of the 21st century will probably have become extinct by the year 2100.[5][6][7]