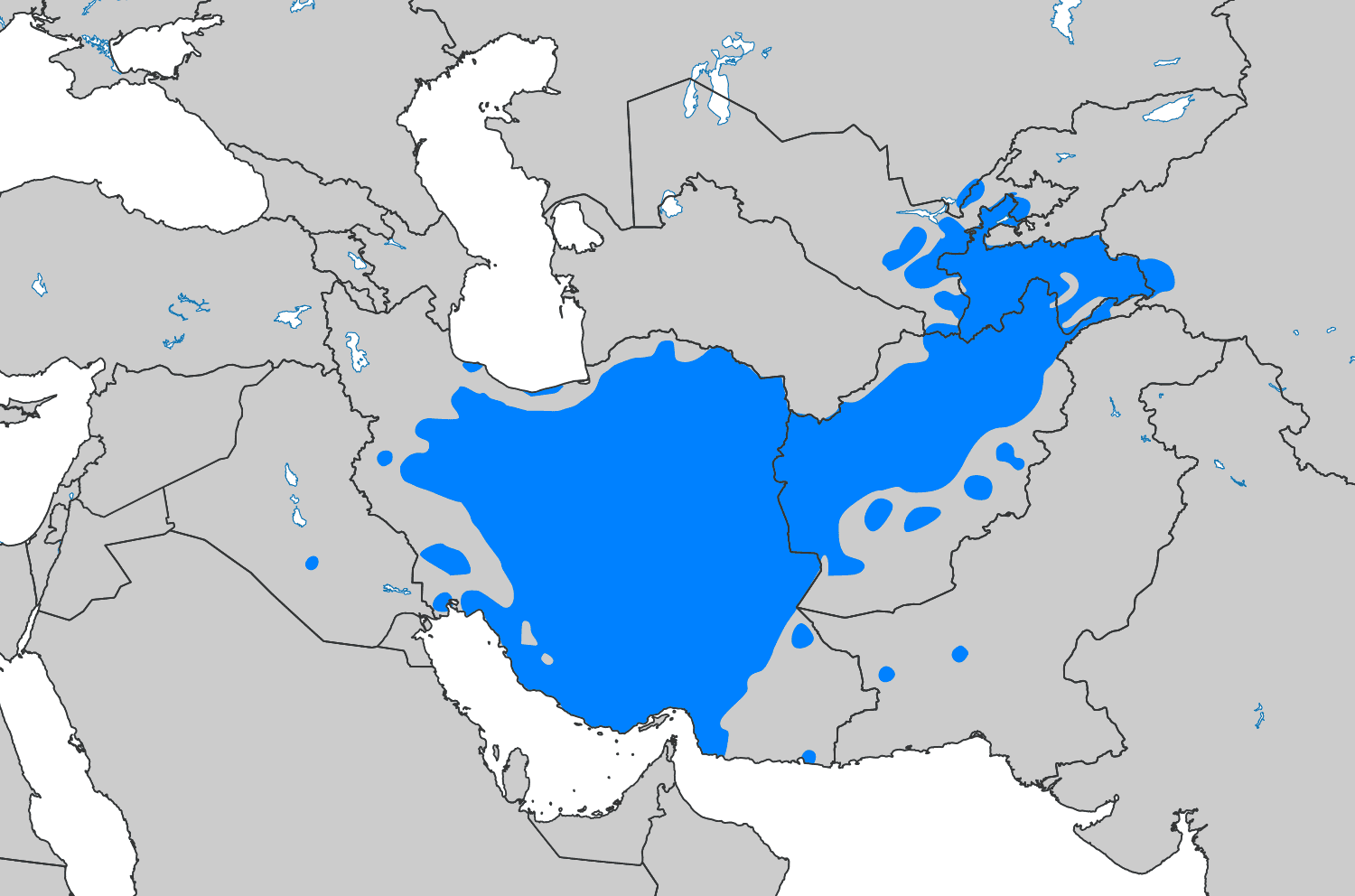 listen)), is a Western Iranian language belonging to the Iranian branch of the Indo-Iranian subdivision of the Indo-European languages. Persian is a pluricentric language predominantly spoken and used officially within Iran, Afghanistan, and Tajikistan in three mutually intelligible standard varieties, namely Iranian Persian (officially known as Persian),[11][12][13] Dari Persian (officially known as Dari since 1964)[14] and Tajiki Persian (officially known as Tajik since 1999).[15][16] It is also spoken natively in the Tajik variety by a significant population within Uzbekistan,[17][18][19] as well as within other regions with a Persianate history in the cultural sphere of Greater Iran. It is written officially within Iran and Afghanistan in the Persian alphabet, a derivation of the Arabic script, and within Tajikistan in the Tajik alphabet, a derivation of the Cyrillic script.

This article contains Persian text. Without proper rendering support, you may see question marks, boxes, or other symbols.

Modern Persian is a continuation of Middle Persian, an official language of the Sasanian Empire (224–651 CE), itself a continuation of Old Persian, which was used in the Achaemenid Empire (550–330 BCE).[20][21] It originated in the region of Pars (Persia) in southwestern Iran.[22] Its grammar is similar to that of many European languages.[23]

Throughout history, Persian was considered prestigious by various empires centered in Western Asia, Central Asia, and South Asia.[24] Old Persian is attested in Old Persian cuneiform on inscriptions from between the 6th and 4th century BC. Middle Persian is attested in Aramaic-derived scripts (Pahlavi and Manichaean) on inscriptions and in Zoroastrian and Manichaean scriptures from between the third to the tenth centuries (see Middle Persian literature). New Persian literature was first recorded in the ninth century, after the Muslim conquest of Persia, since then adopting the Arabic script.[25]

Persian was the first language to break through the monopoly of Arabic on writing in the Muslim world, with Persian poetry becoming a tradition in many eastern courts.[24] As British scholar David G. Hogarth stated, "Never has captor more swiftly and subtly been captured by his captive than Arabic by Persia".[26] It was used officially as a language of bureaucracy even by non-native speakers, such as the Ottomans in Anatolia,[27] the Mughals in South Asia, and the Pashtuns in Afghanistan. It influenced languages spoken in neighboring regions and beyond, including other Iranian languages, the Turkic, Armenian, Georgian, and Indo-Aryan languages. It also exerted some influence on Arabic,[28] while borrowing a lot of vocabulary from it in the Middle Ages.[20][23][29][30][31][32]

Some of the world's most famous pieces of literature from the Middle Ages, such as the Shahnameh by Ferdowsi, the works of Rumi, the Rubáiyát of Omar Khayyám, the Panj Ganj of Nizami Ganjavi, The Divān of Hafez, The Conference of the Birds by Attar of Nishapur, and the miscellanea of Gulistan and Bustan by Saadi Shirazi, are written in Persian.[33] Some of the prominent modern Persian poets were Nima Yooshij, Ahmad Shamlou, Simin Behbahani, Sohrab Sepehri, Rahi Mo'ayyeri, Mehdi Akhavan-Sales, and Forugh Farrokhzad.

There are approximately 110 million Persian speakers worldwide, including Persians, Lurs, Tajiks, Hazaras, Iranian Azeris, Iranian Kurds, Balochs, Tats, and Aimaqs. The term Persophone might also be used to refer to a speaker of Persian.[34][35]