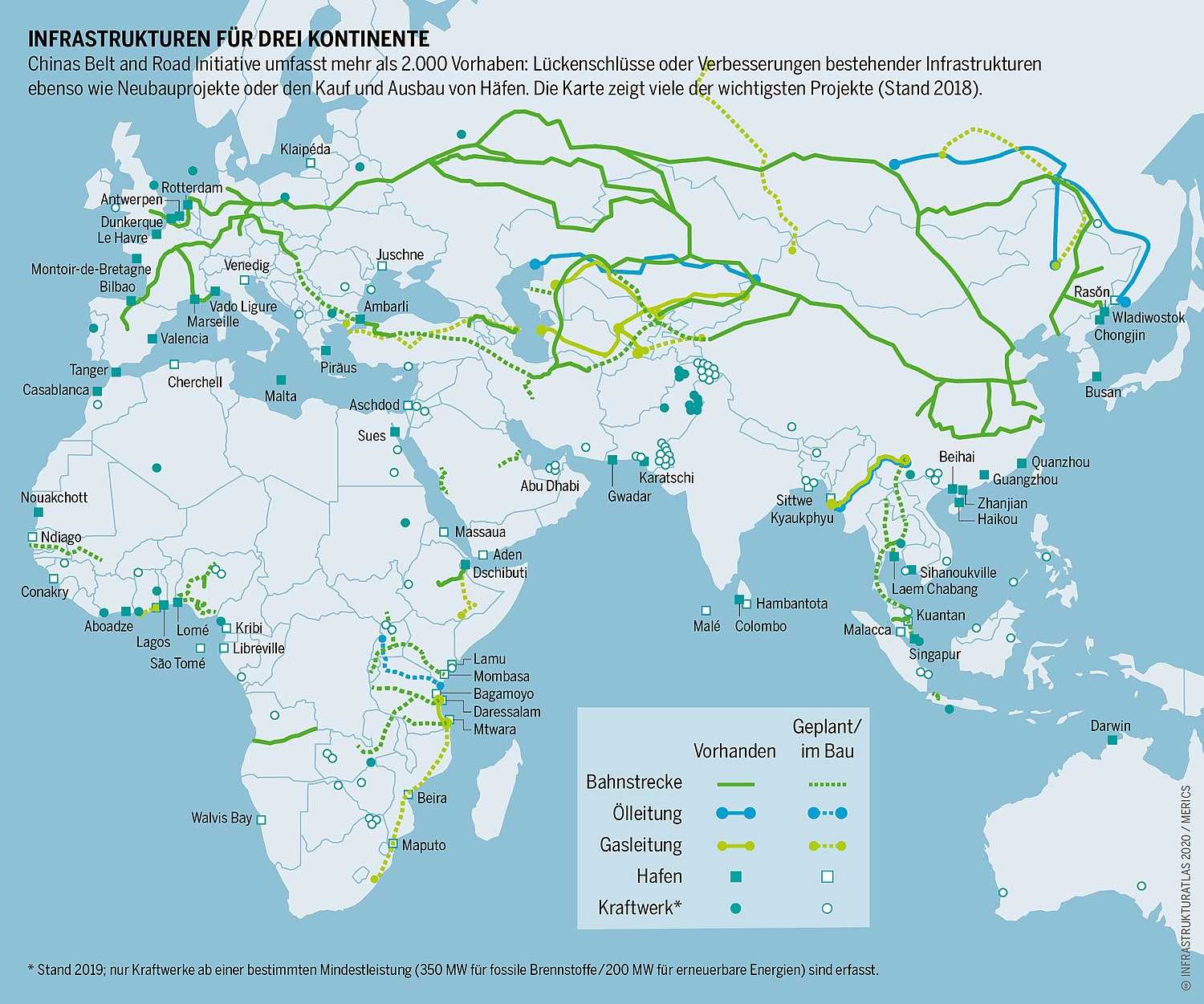 The Belt and Road Initiative (BRI, or B&R[1]), known within China as the One Belt One Road (Chinese: 一带一路) or OBOR for short[2], is a global infrastructure development strategy adopted by the Chinese government in 2013 to invest in more than 150 countries and international organizations.[3][4] It is considered a centerpiece of the Chinese leader Xi Jinping's foreign policy.[5] The BRI forms a central component of Xi's "Major Country Diplomacy" (Chinese: 大国外交) strategy, which calls for China to assume a greater leadership role for global affairs in accordance with its rising power and status.[6] It has been compared to the American Marshall Plan. As of January 2023[update], 151 countries were listed as having signed up to the BRI.[7]

Xi originally announced the strategy as the "Silk Road Economic Belt" during an official visit to Kazakhstan in September 2013.[8][9][10] "Belt" is short for the "Silk Road Economic Belt," referring to the proposed overland routes for road and rail transportation through landlocked Central Asia along the famed historical trade routes of the Western Regions; whereas "road" is short for the "21st Century Maritime Silk Road", referring to the Indo-Pacific sea routes through Southeast Asia to South Asia, the Middle East and Africa.[11] Examples of Belt and Road Initiative infrastructure investments include ports, skyscrapers, railroads, roads, bridges, airports, dams, coal-fired power stations, and railroad tunnels.

The initiative was incorporated into the Constitution of China in 2018.[5] The Xi Jinping Administration calls the initiative "a bid to enhance regional connectivity and embrace a brighter future."[12] The project has a target completion date of 2049,[13] which will coincide with the centennial of the People's Republic of China (PRC)'s founding.

Numerous studies conducted by the World Bank have estimated that BRI can boost trade flows in 149 participating countries by 4.1 percent, as well as cutting the cost of global trade by 1.1 percent to 2.2 percent, and grow the GDP of East Asian and Pacific developing countries by an average of 2.6 to 3.9 percent.[14][15] According to London-based consultants Centre for Economics and Business Research, BRI is likely to increase the world GDP by $7.1 trillion per annum by 2040, and that benefits will be "widespread" as improved infrastructure reduces "frictions that hold back world trade". CEBR also concludes that the project will be likely to attract further countries to join, if the global infrastructure initiative progresses and gains momentum.[16][17][18]

Supporters praise the BRI for its potential to boost the global GDP, particularly in developing countries. However, there has also been criticism over human rights violations and environmental impact, as well as concerns of debt-trap diplomacy resulting in neocolonialism and economic imperialism. Many of the concerns of debt-trap diplomacy are actively debated, however.