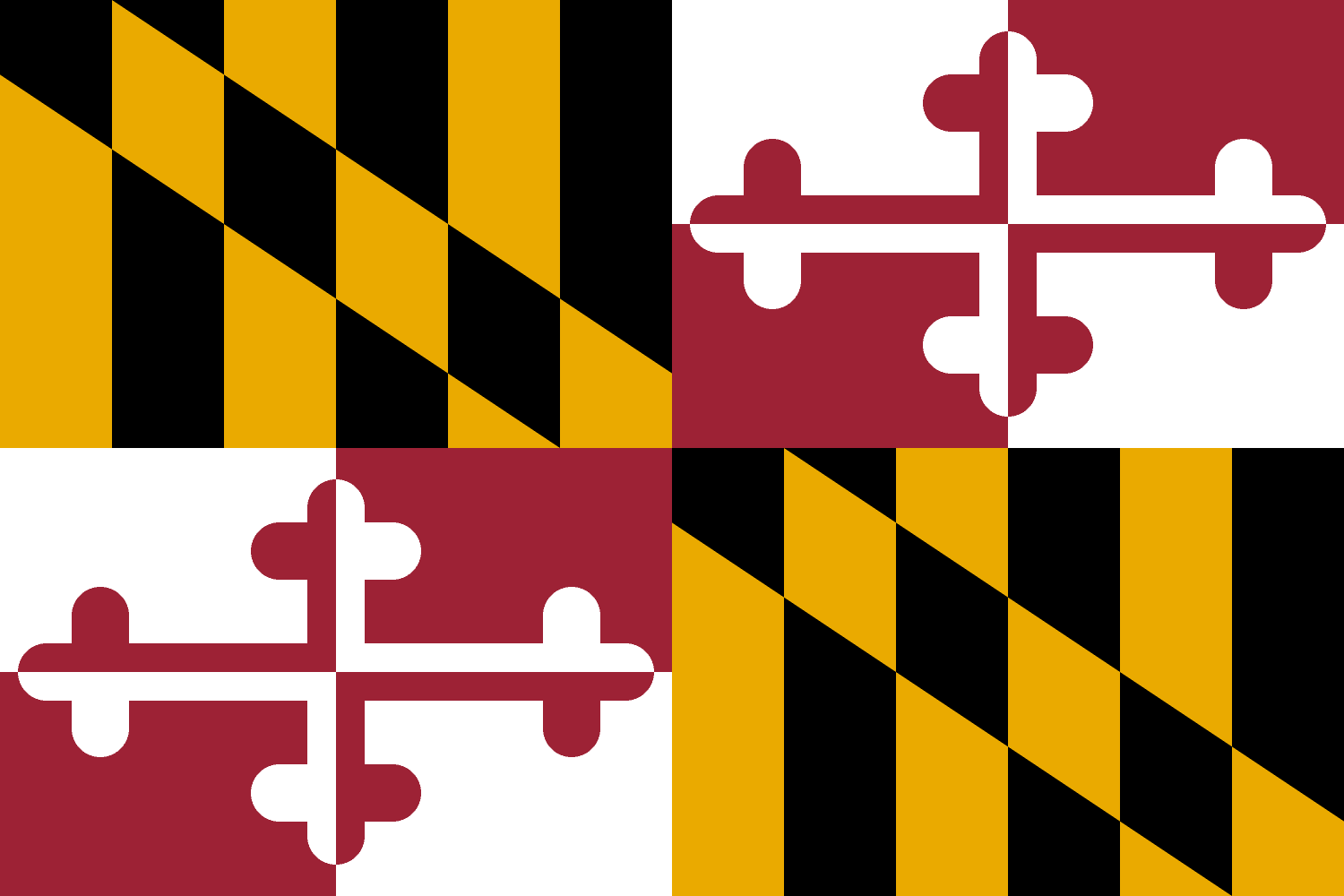 listen) MERR-il-ənd)[lower-alpha 2] is a state in the Mid-Atlantic region of the United States.[10][11] It shares borders with Virginia, West Virginia, and the District of Columbia to its south and west; Pennsylvania to its north; and Delaware and the Atlantic Ocean to its east. With a total land area of 12,407 square miles (32,130 km2), Maryland is the 8th smallest state by land area, but with a population of over 6,177,200, it ranks as the 18th most populous state and the 5th most densely populated. Baltimore[12] is the largest city in the state, and the capital is Annapolis. Among its occasional nicknames are Old Line State, the Free State, and the Chesapeake Bay State. It is named after Henrietta Maria, the French-born queen of England, Scotland, and Ireland, who was known then in England as Mary.[13][14]

Before its coastline was explored by Europeans in the 16th century, Maryland was inhabited by several groups of Native Americans – mostly by Algonquian peoples and, to a lesser degree, Iroquoian and Siouan.[15] As one of the original Thirteen Colonies of England, Maryland was founded by George Calvert, 1st Baron Baltimore, a Catholic convert[16][17] who sought to provide a religious haven for Catholics persecuted in England.[18] In 1632, Charles I of England granted Lord Baltimore a colonial charter, naming the colony after his wife, Henrietta Maria.[19] Unlike the Pilgrims and Puritans, who rejected Catholicism in their settlements, Lord Baltimore envisioned a colony where people of different religious sects would coexist under the principle of toleration.[18] Accordingly, in 1649 the Maryland General Assembly passed an Act Concerning Religion, which enshrined this principle by penalizing anyone who "reproached" a fellow Marylander based on religious affiliation.[20] Nevertheless, religious strife was common in the early years, and Catholics remained a minority, albeit in greater numbers than in any other English colony.

Maryland's early settlements and population centers clustered around rivers and other waterways that empty into the Chesapeake Bay. Its economy was heavily plantation-based and centered mostly on the cultivation of tobacco. Demand for cheap labor from Maryland colonists led to the importation of numerous indentured servants and enslaved Africans. In 1760, Maryland's current boundaries took form following the settlement of a long-running border dispute with Pennsylvania. Maryland was an active participant in the events leading up to the American Revolution, and by 1776, its delegates signed the Declaration of Independence. Many of its citizens subsequently played key political and military roles in the war. In 1790, the state ceded land for the establishment of the U.S. capital of Washington, D.C.

Although then a slave state, Maryland remained in the Union during the American Civil War, its strategic location giving it a significant role in the conflict. After the Civil War, Maryland took part in the Industrial Revolution, driven by its seaports, railroad networks, and mass immigration from Europe. Since the 1940s, the state's population has grown rapidly, to approximately six million residents, and it is among the most densely populated U.S. states. As of 2015[update], Maryland had the highest median household income of any state, owing in large part to its proximity to Washington, D.C., and a highly diversified economy spanning manufacturing, retail services, public administration, real estate, higher education, information technology, defense contracting, health care, and biotechnology.[21] The state's central role in U.S. history is reflected by its hosting of some of the highest numbers of historic landmarks per capita.

Sixteen of Maryland's twenty-three counties, as well as the city of Baltimore, border the tidal waters of the Chesapeake Bay estuary and its many tributaries,[22][12] which combined total more than 4,000 miles of shoreline. Although one of the smallest states in the U.S., it features a variety of climates and topographical features that have earned it the moniker of America in Miniature.[23] In a similar vein, Maryland's geography, culture, and history combine elements of the Mid-Atlantic, Northeastern, and Southern regions of the country.