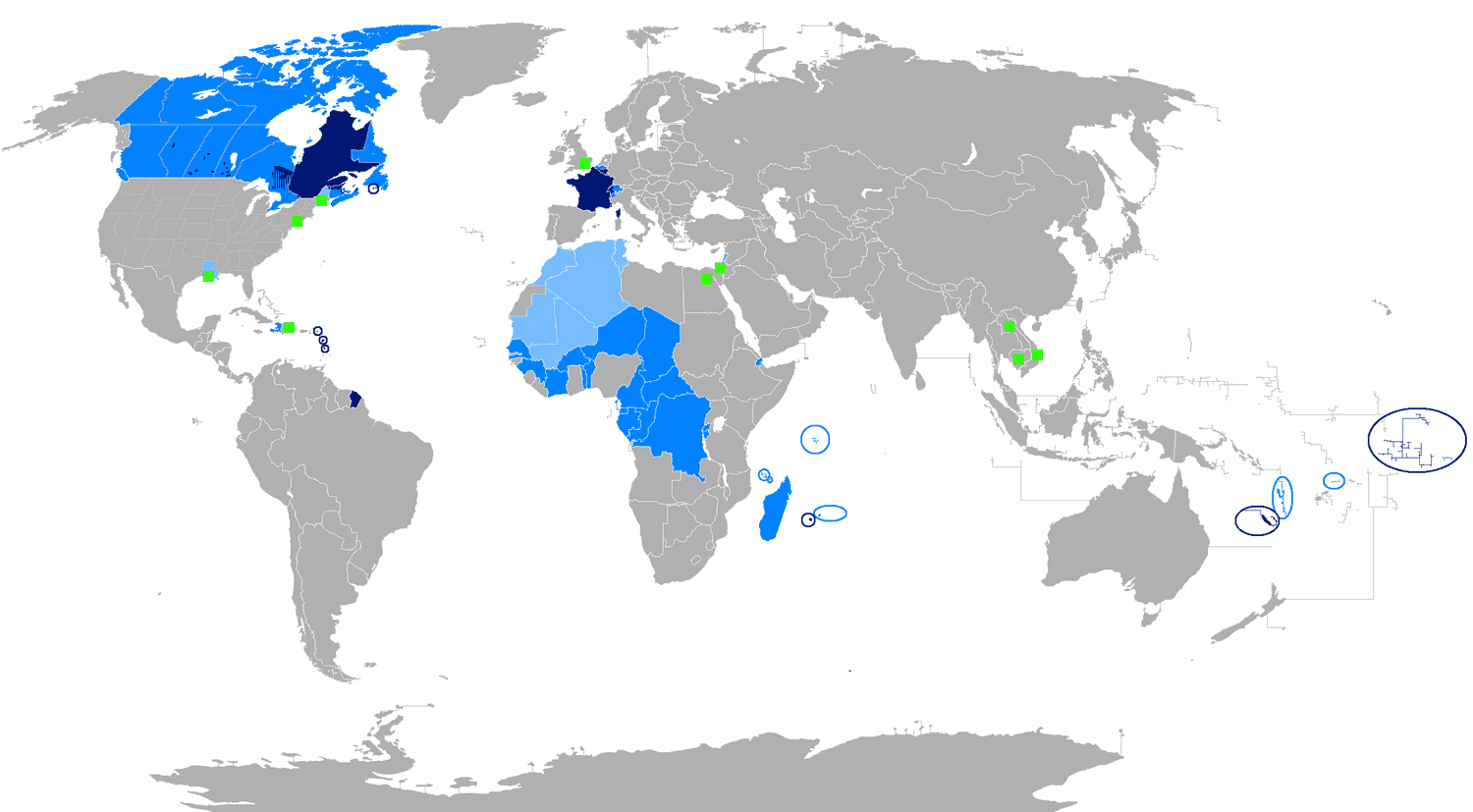 French (français [fʁɑ̃sɛ] or langue française [lɑ̃ɡ fʁɑ̃sɛz]) is a Romance language of the Indo-European family. It descended from the Vulgar Latin of the Roman Empire, as did all Romance languages. French evolved from Gallo-Romance, the Latin spoken in Gaul, and more specifically in Northern Gaul. Its closest relatives are the other langues d'oïl—languages historically spoken in northern France and in southern Belgium, which French (Francien) largely supplanted. French was also influenced by native Celtic languages of Northern Roman Gaul like Gallia Belgica and by the (Germanic) Frankish language of the post-Roman Frankish invaders. Today, owing to France's past overseas expansion, there are numerous French-based creole languages, most notably Haitian Creole. A French-speaking person or nation may be referred to as Francophone in both English and French.

French is an official language in 29 countries across multiple continents,[2] most of which are members of the Organisation internationale de la Francophonie (OIF), the community of 84 countries which share the official use or teaching of French. French is also one of six official languages used in the United Nations.[3] It is spoken as a first language (in descending order of the number of speakers) in France; Canada (especially in the provinces of Quebec, Ontario, and New Brunswick, as well as other Francophone regions); Belgium (Wallonia and the Brussels-Capital Region); western Switzerland (specifically the cantons forming the Romandy region); parts of Luxembourg; parts of the United States (the states of Louisiana, Maine, New Hampshire and Vermont); Monaco; the Aosta Valley region of Italy; and various communities elsewhere.[4]

In 2015, approximately 40% of the francophone population (including L2 and partial speakers) lived in Europe, 36% in sub-Saharan Africa and the Indian Ocean, 15% in North Africa and the Middle East, 8% in the Americas, and 1% in Asia and Oceania.[5] French is the second-most widely spoken mother tongue in the European Union.[6] Of Europeans who speak other languages natively, approximately one-fifth are able to speak French as a second language.[7] French is the second-most taught foreign language in the EU. All institutions of the EU use French as a working language along with English and German; in certain institutions, French is the sole working language (e.g. at the Court of Justice of the European Union).[8] French is also the 18th most natively spoken language in the world, fifth most spoken language by total number of speakers and the second or third most studied language worldwide (with about 120 million learners as of 2017).[9] As a result of French and Belgian colonialism from the 16th century onward, French was introduced to new territories in the Americas, Africa and Asia. Most second-language speakers reside in Francophone Africa, in particular Gabon, Algeria, Morocco, Tunisia, Mauritius, Senegal and Ivory Coast.[10]

French is estimated to have about 76 million native speakers; about 235 million daily, fluent speakers;[11][1][12] and another 77–110 million secondary speakers who speak it as a second language to varying degrees of proficiency, mainly in Africa.[13] According to the OIF, approximately 321 million people worldwide are "able to speak the language",[14] without specifying the criteria for this estimation or whom it encompasses.[15] According to a demographic projection led by the Université Laval and the Réseau Démographie de l'Agence universitaire de la Francophonie, the total number of French speakers will reach approximately 500 million in 2025 and 650 million by 2050.[16] OIF estimates 700 million by 2050, 80% of whom will be in Africa.[5]