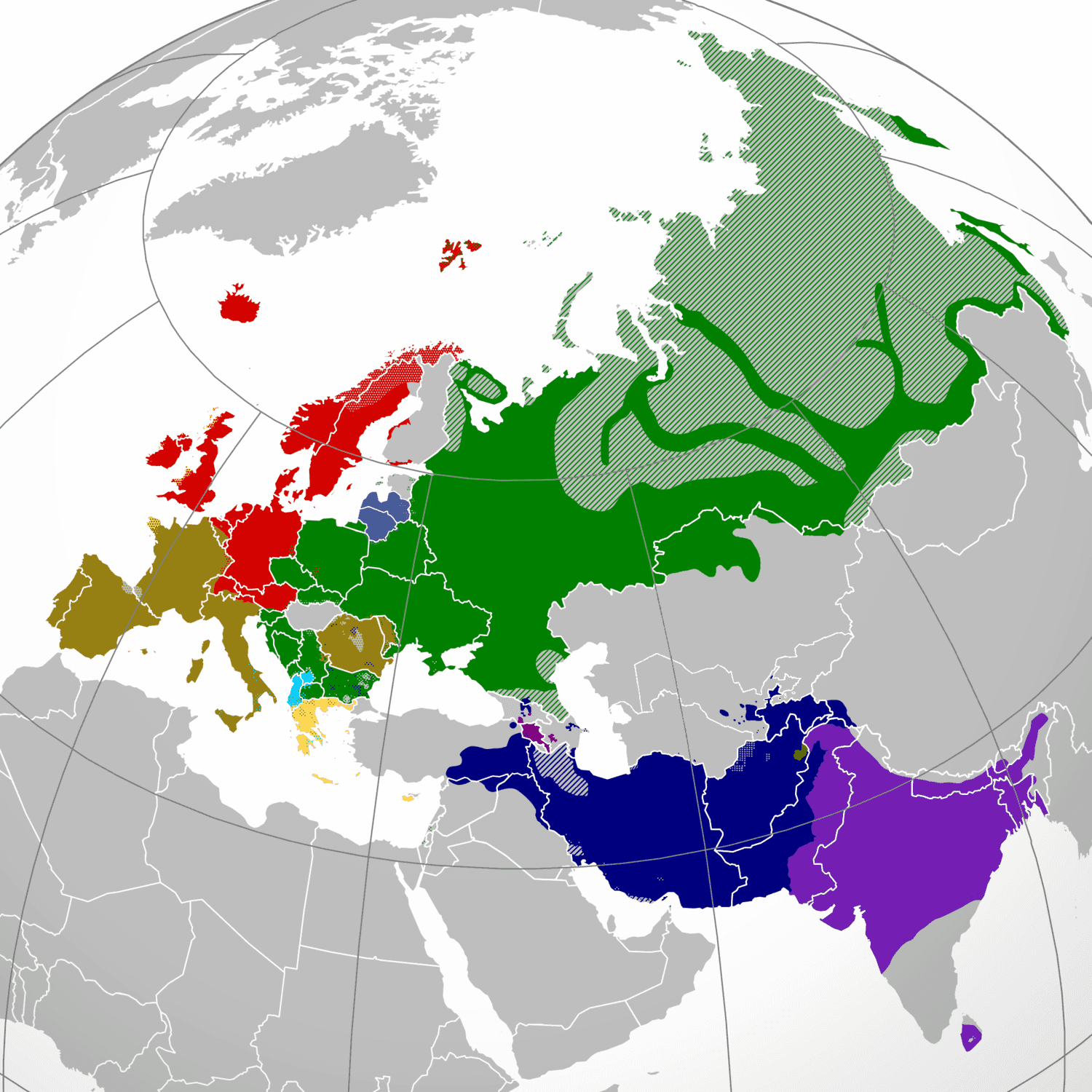 The Indo-European languages are a language family native to the overwhelming majority of Europe, the Iranian plateau, and the northern Indian subcontinent. Some European languages of this family, English, French, Portuguese, Russian, Dutch, and Spanish, have expanded through colonialism in the modern period and are now spoken across several continents. The Indo-European family is divided into several branches or sub-families, of which there are eight groups with languages still alive today: Albanian, Armenian, Balto-Slavic, Celtic, Germanic, Hellenic, Indo-Iranian, and Italic; and another nine subdivisions that are now extinct.

Today, the individual Indo-European languages with the most native speakers are English, Hindi–Urdu, Spanish, Bengali, French, Russian, Portuguese, German, and Punjabi, each with over 100 million native speakers; many others are small and in danger of extinction.

In total, 46% of the world's population (3.2 billion people) speaks an Indo-European language as a first language — by far the highest of any language family. There are about 445 living Indo-European languages, according to an estimate by Ethnologue, with over two-thirds (313) of them belonging to the Indo-Iranian branch.[1]

All Indo-European languages are descended from a single prehistoric language, linguistically reconstructed as Proto-Indo-European, spoken sometime in the Neolithic to Early Bronze Age. The geographical location where it was spoken, the Proto-Indo-European homeland, has been the object of many competing hypotheses; the academic consensus supports the Kurgan hypothesis, which posits the homeland to be the Pontic–Caspian steppe in what is now Ukraine and southern Russia, associated with the Yamnaya culture and other related archaeological cultures during the 4th millennium BC to early 3rd millennium BC. By the time the first written records appeared, Indo-European had already evolved into numerous languages spoken across much of Europe, South Asia, and part of Western Asia. Written evidence of Indo-European appeared during the Bronze Age in the form of Mycenaean Greek and the Anatolian languages of Hittite and Luwian. The oldest records are isolated Hittite words and names — interspersed in texts that are otherwise in the unrelated Akkadian language, a Semitic language — found in texts of the Assyrian colony of Kültepe in eastern Anatolia dating to the 20th century BC.[2] Although no older written records of the original Proto-Indo-European population remain, some aspects of their culture and their religion can be reconstructed from later evidence in the daughter cultures.[3] The Indo-European family is significant to the field of historical linguistics as it possesses the second-longest recorded history of any known family, after the Afroasiatic family in the form of the pre-Arab Egyptian language and the Semitic languages. The analysis of the family relationships between the Indo-European languages, and the reconstruction of their common source, was central to the development of the methodology of historical linguistics as an academic discipline in the 19th century.

The Indo-European family is not known to be linked to any other language family through any more distant genetic relationship, although several disputed proposals to that effect have been made.